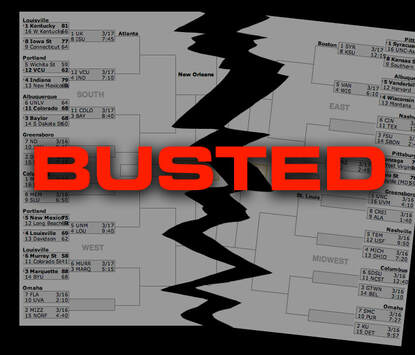 Hey sports lovers out there! Has your bracket already been busted? Mine has! I’m not sure where it all went wrong as I filled out my NCAA Men’s Basketball bracket in a drunken fit of rage and figured that at least two or three upsets would occur. When that didn’t happen, I essentially threw money right down the toilet like I do every year.

Not only that, the team that was favored to win it all, Syracuse got the ‘ole loopty-loop and had their star center yanked for some kind of bullshit reason. Probably academic, or something ridiculous. I realize an education is important, but holding a 7-foot tall basketball player out of a huge national basketball tournament because he didn’t make the grades is like telling a biology genius he can’t go to the Siemens Math, Science and Technology competitions because he failed gym. It’s fucking absurd!

I’m sure Melo, the Syracuse center, can get by in this cruel world on street smarts alone, but is there any doubt this dude is going to play in the NBA someday? I mean, C’MON!!! He’s 7 feet tall!!! He’s not splitting atoms here. He’s putting a ball in a hoop and it’s hard to find good athletic 7 footers in the world. Having an academic probation on college athletes is just stupid.

Anyway, after I submitted my bracket to (insert large national sports website here), I realized I forgot to print it out, so I have no way of knowing if it’s really busted or not. My guess, from past experiences, is that it resembles something like a test I took in high school that would have gotten me into anyone of these colleges on academic merits. That said, I come from the school of hard knocks.

Much discussion has been made whether to pay student athletes or not. People seem to think it’s immoral to pay them, yet they have no problem shilling regular students hundreds of thousands of dollars in student loans to get an education and putting them in financial debt for a large chunk of their adult lives. So hey, let’s make sure our priorities are completely fucked up while we cast judgments.

Really what these schools should do is take the guys who are more likely to make a living playing professional ball either here in the USA or overseas and teach them basic economics. Like how to save money, break away from shifty friends who want hand-outs and hiring a financial advisor that will prevent them from going broke by the age of 33. That’s a class they should and probably will pass.

So what is the point of this blog entry? I’m really not sure. I think I’m just bummed that I’m completely incapable of filling out a NCAA bracket, but that has more to do with my gambling habits and less to do with my research into who these teams are. Some of these schools I’ve never heard of and don’t know where they are on a US map. Unless the school, has the name of the city or state in the name, I’m at a loss.

So with that said, I hope your bracket is alive and well. If you’ve managed to predict the underdogs and upsets, you basically guessed your way through the tourney and got lucky. And don’t tell me different. Even the nerds on ESPN and SI.com are wrong all the time. Nobody can predict the future. It’s a guess wrapped inside some half-assed knowledge. You can’t predict heart, determination, and the lucky bounces of a few balls.

You can though, save your money and keep in your pocket and spend it on a nice dinner and not throw it into some bullshit prediction in which about 5,962 variables have to come together in perfect harmony for it to succeed. Now instead of having a steak tonight, I’m having Steak-Ums... One Steak-Um. Not even Steak-Um”s”. Just one Steak-Um… that I borrowed from my neighbor. So it’s not even my Steak-Um. It’s a borrowed Steak-Um that I have to return someday.

Lesson here? Keep your money and buy your own Steak-Ums because Steak is expensive and borrowing things from your neighbor is stupid because he lives right next door and knows when I come and go and I can’t escape him. Did I mention I owe him money too?