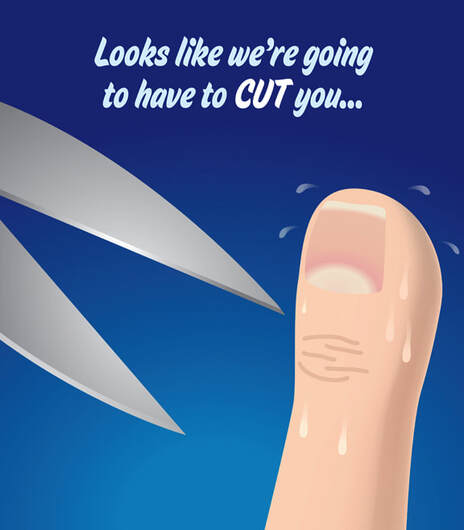 Let’s face some cold hard facts about the business world. We live in tough financial times where CEOs, COOs, Presidents and other initialled and entitled leaders of companies need to make yearly cuts to feed the ever-hungry beast that is their own greed. They have no qualms about slashing the jobs of good, hard-working people with children and mountains of hospital bills, so they can inflate their bonuses into the six-figure range. These animals would happily push an old lady down a flight of stairs, then walk across her back to avoid getting blood on their $1,900 handmade Italian leather shoes that she’s carelessly coughing up onto the floor.

In a company’s desperate attempt to save money, they’ll eliminate a person who they think is expendable. Even if that person is totally crucial to the inner-workings of the organization. The people at the top usually have no clue whatsoever as to how their company is actually functioning below them, so when someone says the company needs to save some money and make a few cuts, they chop the sacrificial lamb based on numbers in a book. This elimination process is usually as well thought out as an impromptu game of Pin The Tail On The Donkey after about 13 Jaeger bombs.

A big cheese boss tells one of his lackey yes men, “save some money,” and that’s exactly what that lackey does. Even if in the long run it kills the workflow and identity of what was working so well in the first place. Sort of like a surgeon deciding—without any research, future speculation or thought to alternative options at all—to cut off the thumb to save the hand. The hand is saved, sure, but the hand is now completely non-functional. The company will attempt to use the hand like they did before, but now it’s a useless stump that they’ll continue to mash against the buttons and levers of the ever-churning grinding gears. The thumb removal was a temporary fix, but now they have to deal with the long-term ramifications.

They’ll then try to fix the problem by replacing the thumb. “why don’t we stick a metal thumb on there as a replacement or perhaps a fresh toe?” It will be glued, sewn or perhaps carelessly tossed into place, but it doesn’t compare with the former fully-functioning original, and again the hand will be virtually worthless. Now the real thumb is gone, an imposter is in its place and it’s not possible to put the old thumb back—the surgery for that type of procedure hasn’t been invented yet. You know what the company will do to fix this particular problem? Throw money at it. In fact, the money that was initially saved when cutting the original thumb probably has to be used to fix this mess. Now, some other poor bastard in the company with a sick child and overdue credit card bills will probably be kicked to the curb in an effort to save the company the cash they wanted to save in the first thumb-chopping incident. It’s a vicious cycle.

This is how we treat the common worker these days. Replace with a cheaper model to improve the budget, while eliminating the functionality. What most companies do in this type of “downgrade” is get rid of everything that was remotely important—like experience, determination, hard-work, loyalty, business connections and the familiarity of every aspect of the business that made it all go so smoothly in the first place. Sometimes we don’t even replace the former model with a new model. We just ask the other workers in the general vicinity to work harder; sometimes asking them to do things they’re not trained to do, so the company can compensate for the missing person. Usually this overcompensation is asked of its employees with a firm handshake and a hearty “for the good of the company,” all the while they’re plotting your professional demise.

What most big wigs at the top don’t realize is that the temporary fix saves a few bucks here and there, but the amount of time, effort and yes, MONEY it takes to replace the incalculable asset that were cut away in the first place, almost surely kills any money saving it was intended to create. The new person needs to be trained, learn the inner workings, needs to make all the adjustments and contacts the person they replaced spent years making. They need guidance from the other workers, who in turn need to take time away from what they’re doing to teach and guide. The trickle effect of inefficiency begins to seep through the floors.

Eventually the new person is ensconced in the workflow, but at what cost? The people who helped them get situated have worked twice as hard to get them there, they’ve neglected their work and have probably cost the company as much money as it did to slice a bit of cost saving in the first place. But what difference does it make? By the time anyone figures it all out, the boss has his fat bonus and he’s used it to re-trim the brass on his 85 foot yacht. And just be thankful you didn’t stop THAT necessity from happening by “mucking up the process” because he probably would have hired some recent prison-released malcontent to have your family hacked to pieces with a clever if you stood in his way.

Don’t let any of these bullshit shows like Undercover Boss or Secret Millionaire give you a false sense of the nature of these corporate head honcho vampires. These savages will grind you, and those you love, into hamburger and happily serve it up at their next backyard bar-b-que in the Hamptons—and not even bat an eye. In fact, they’ll give the recipe to their friends and laugh about it as they drink your blood from fine crystal goblets.

We’ve just reached the 8 billion persons mark on this planet, yet the richest people are becoming more entitled to the point that they’re approaching royalty in their mannerisms and thinking. This is the type of attitude that causes the masses to start rioting and if people don’t watch their backs, heads will start to roll. Or at least a few thumbs.