DANCES WITH WOLVES vs. GOODFELLAS 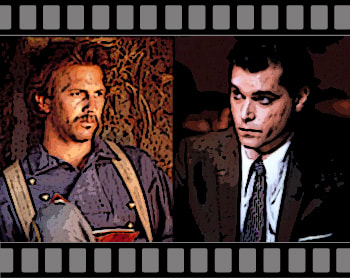 At the time it didn’t seem like such a huge shocker as Dance With Wolves was a humungous success at the box office and beloved by critics and audiences all over the world. But as the years have worn on, it appears more and more like passing over Goodfellas for Best Picture was a monumental forehead-slapping mistake in the tightly wound world of film critics and movie lovers alike.

Back in the land of the early 90s, Goodfellas seemed like the third or fourth best gangster drama to flicker against a movie screen, dwarfed by the still reining champs of Godfather’s I and II, and perhaps something else I’m forgetting—probably the faint overshadowing of Scorcese’s own films like Raging Bull or Taxi Driver, and even the balls-to-the-wall cartooniness of De Palma’s Scarface.

Now, Goodfellas is easily in many critics top 5 favorite films of all time, while Dances isn’t even mentioned in the same breath. Costner’s western epic is often sighted as being a reworking of the Arthur Penn classic Little Big Man starring Dustin Hoffman. Both of those westerns are about a white man involved with the life of the plains Indians when their world is uprooted by the big bad world of the white man and their never-ending western movement known as Manifest Destiny.

Scorsese’s Goodfellas has come out of the shadows of the Godfather double shot and in some circles, has even been seen as something more of cinematic achievement based on its factual roots as the real life story of Nicolas Pileggi, and a frenetic wild ride that spans decades in a few hours in a way that only Scorsese can present. Mindboggling camera shots paired with some of Hollywood’s finest performances, it’s a masterpiece that wrangled Joe Pesci and Oscar and made Ray Liotta a household name.

And if we’re telling bold truths here, what relevant film watcher and award-whore doesn’t think that Scorsese’s Oscars for best film and director for pseudo-gangster knockoff, The Departed was a make up vote for the knuckleheaded oversight of passing on Goodfellas?

So the general consensus is that Goodfellas is the classic and Dances With Wolves is a good movie that didn’t really deserve what it got. Right?

Well, I’m not buying it actually. I was actually one of the many who was quite pleased with Dances as the Oscar winner back in the day; something my good friend Kevin thought cemented me as an unsophisticated movie-watching hack for celebrating at the time. And like many others, I’ve become quite enamored with Goodfellas as time has gone on. In fact, it’s slowly crept into my top 20 favorites of all time, whereas Dances has quietly crept out.

But then something happened that got me back on the Dances bandwagon once more. I watched the film one late night and fell in love with it again.

The fact that it’s a first time directing effort should not disqualify it from contention as a classic. Yes, Costner’s following efforts like The Postman have shown that he may have been a one-off in the artistic endeavor of directing, who may have simply displayed quality material in a lovely package, while Scorsese has consistently knocked it out of the ballpark a dozen times and more. But Costner still took an epic story and made it whirl buy in a flash and made it incredibly engaging, even though half the film is spoken in Lakota Indian.

What’s interesting is that both films in question are narrated by the protagonist. Costner’s Lieutenant John Dunbar monotones his way through a series of life realizations while pensively writing and painting his experiences into a journal that becomes a pivoting factor to the plot. Ray Liotta’s Henry Hill narrates his life experience in a ‘rich as tomato sauce for blood’ way that carries the film, sets the tone and makes it pop. Interestingly enough though, that narration actually stops about 2/5 of the way through where Karen, his beleaguered Jewish wife (played by Lorraine Bracco) begins to narrate and propel the story from her perspective.

Both films then stop the narration and plow through a series of traumatic events that culminate in a big emotional ending and fade to pre-credit backstory summaries in which the next 10 to 125 years are broken down into a quick obituary-like blurbs of each character or race of people… respectively.

In reality, these two films couldn’t be more similar. Dances is as simple as a grade school history text book, and Goodfellas as complicated as 4 seasons of The Sopranos combined, but as narrative film structures, they’re about as close as you can get to making quality epics as engaging and as breezy as three hour films can get.

What makes them engaging is they make the viewer become so involved with the characters, that you become emotionally involved with the stakes and the outcome of their decisions. You’re so truly elated that John Dunbar found this new family with the Lakota, that you simply can’t bear to watch as the U.S. Army begins to filter back into his life, threatening to undo everything he’s worked so hard to achieve and eliminate the Indian way of life for all Native Americans.

And although Henry Hill is a common criminal who is running drugs and ruining his life and the livelihood of those around him, you have the same drug-fueled frenetic energy he has as he scrambles from one mess to the next, trying to make sense of his world while juggling so many balls that are about to crash down around him.

It’s powerful filmmaking on both sides of the fence and each film deserves accolades. But what got me so onto this subject again was my on again/off again love affair with a film that I never should have stopped loving in the first place. A film in which many people, including myself, have defended for many reasons.

During a rare extended moment of downtime in my life, I was actually able to watch both films all the way through and re-see them through a fresh pair of eyes. And thus this piece was born. By the end of Goodfellas, I was as rough-shaven and exhausted as Henry Hill was—having felt as if I’d gone through the wringer a few time over while checking my pulse and looking over my shoulder for the Feds.

Towards the end of Dances, I was so entranced by the film and the characters that I was more emotionally involved than just about any set of characters in any film I’ve watched in my life. I couldn’t be any more removed from the ways of the Lakota Indians as I type this in my NYC apartment, but I found a close relation to them unlike many in film before—probably because on some extended level, we all desire to run back to the woods for a simple life, even if we’ll miss the ease of the refrigerator and hair dryer. The character development in Dances is as well presented and engaging as any film ever made, including Goodfellas and I found myself on the edge of my seat as the film climaxed.

When John Dunbar is rescued by his Lakota family from the evil clutches of his savage army mates, my emotional involvement was unlike many conjured up by a film of fiction. And the final scene: where John returns home to the winter camp of the Lakota, his wife (played by Mary McDonnell) running to him in the snow, the scene editing between shots of the two coming towards one another, the moment building until they finally embrace after thinking they’d lost one other forever, falling into the snow and kissing passionately, is truly one of the most beautiful moments rendered on film and one that welled me up with tears upon watching it again. It’s a moment I never had with Goodfellas and may be a moment that tipped the favor to Dances in the eyes of an emotional Academy voting set, consisting of artists and writers who are suckers for a good misty-eyed moment.

These two great films are works of fiction, there is no doubt about that. They both are generally based on true events in actual times, but are revisionist works of historical facts. The detractors of Costner’s Wolves, other than a general dislike of the film is the fact that it is not historically correct on certain levels. But the film should be viewed solely as a work of fiction, about a fictitious man in a fictitious world. Goodfellas makes the true life and times of Henry Hill seem like an amusement park ride of the mob underworld, when in reality it was probably a dark and dangerous trip most of the time. These are works of entertainment and should be viewed as nothing more than that.

So was Goodfellas robbed of an Academy Award? Absolutely. Did Dances With Wolves deserve the BIG award? It probably did. Is this just an example of a solid film year where two classic films competed for Hollywood’s top prize on the same night? I think it is.