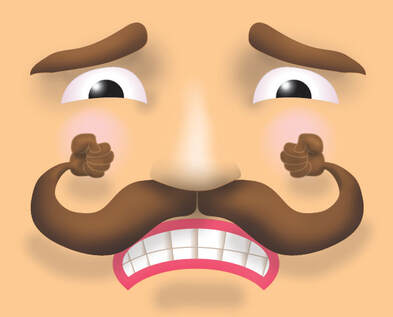 I recently found myself riveted to a competition event on television that blinded me to everything that was happening around me. My wife screamed at me, the steak I was microwaving burst into flames and the beer I was icing up in the freezer froze hard as a rock because I could not tear myself away from this event.

What was this event that happened in early October that had me glued to the tube, you ask? Was it the World Series, or was it a vicious battle between The New York Jets and The New England Patriots or something? The answer is no to both those questions... It was a moustache and beard growing competition.

Now, before you jump all over me, hear me out for a bit. We live in a world where competition is the daily norm for just about everything—which supermarket line is moving faster? Which workmate is stealing my ideas? And can I run across the street before the red hand/walking symbol on the cross walk sign stops blinking?

We live our lives in constant competition and we don’t even know it. We watch sports like football and basketball because it’s our inherent nature to make war, and sports quenches those desires by satiating our bloodlust vicariously. Sports prevent us from killing each other when someone else cuts in front of us in line at the supermarket. We get out that every day rage by watching other men knock the living shit out of one another on the football field; or watching women swim, jump and pole vault to levels we can only dream about. It’s how we get out our frustrations with life.

So what does this have to do with a beard and moustache growing competition? Because as competitive humans, we enjoy competition on many different levels. Some involve more of our time and effort to follow and some involve little involvement, if any, at all. If you’ve ever played the board game trivial pursuit, they have a category called Sports & Leisure. Sports being football, baseball and hockey, and Leisure being pool, darts and cards—among many others. There’s the big time sports and the smaller competitive sports that many of us relate to because we actually play them.

Many of these so called, “Leisure Sports” don’t always translate to television viewing. Watching billiards, bowling, poker and for many, golf, is akin to watching paint dry. They can be painfully boring. Why they’re televised at all is a mystery to many, but with 24 hours in a day and 1,954 channels to choose from, it doesn’t seem so difficult to understand why everything under the sun is on the TV. Anything and everything that can be made into a competition, is made into a competition.

I guess what it all boils down to is, what the word “Sport” actually means. Competition can be made from just about anything. As a kid, did you ever play a game where you tried to knock something back and forth to your friend without it hitting the ground? How many times have you been to a birthday party, where someone inevitably starts tapping a balloon back and forth to you? Eventually someone says, “don’t let it hit the floor” and viola! You suddenly have a sport happening; with rules and group involvement and a certain amount of whimsical joy in the proceedings.

One thing that makes sports so enjoyable to many, if they be leisure or hardcore sports, is our ability to know that there will be a champion in the end—a final level that will culminate in a trophy, with celebrating and confetti. If you flip on ESPN 2 and see a bunch of guys playing cards, you have no emotional investment in who wins or loses. But if you watch American Idol from day one until the final day, the payoff can be an incredibly emotional payoff to see who takes the trophy in the end. If you watch the last five minutes of a movie, you know how it ends, but you probably won’t like it. But you watch it develop from the first frame, you could be cheering from your seat when the credits roll.

So when we get emotionally involved in what the competition is, it can be incredibly rewarding. American Idol can be considered a sport just as much as anything else. It’s a battle of voices instead of a battle with a ball. But a lot of things don’t always translate to TV or to following in the first place. I don’t think anyone would want to watch the National Checkers Championship League, or who the United Dominoes Competition Finalists are. These activities just don’t capture the attention of the common people. Football does. It’s fast, hard hitting and has excitement. Chess, not so much.

So watching the beard and moustache competition seems like it’d be boring, but it was really quite interesting. Mostly because it wasn’t so much a straight up battle, as much as it was a documentary style breakdown of how each person grew their facial hair, where they were from and other personally relevant information. It got me emotionally involved. And that’s how it is with all sports. I get emotionally involved with my teams and the players. Who got arrested, or married, or hurt, or wrote a book or who was on TV the other day and said something nasty about another team. This shit is like The Real Housewives of Beverly Hills, but with a ball, pads and helmets.

Maybe checkers would be fascinating if we got involved in the competition from day one. I don’t know. If you ever saw the documentary The King Of Kong, about playing The video game Donkey Kong competitively, you’d see that getting involved emotionally can really draw you into something that would otherwise seem incredibly dull. I thought the documentary was great, but I know others who thought it was tedious and corny.

So the word “sports” may not only have multiple levels of competition, like Hardcore or Leisure, but multiple levels of meaning. Maybe watching the Green Bay Packers battle it out with the Chicago Bears is just as exhilarating and brutal as watching two women on the Food Network bake a dessert for a $10,000 prize. The sport of football and cooking have many similarities. A lot of blood, sweat and tears are left on the floor, emotions run high and everyone is exhausted. But most importantly, there’s a winner and loser, and that’s just how we like it.