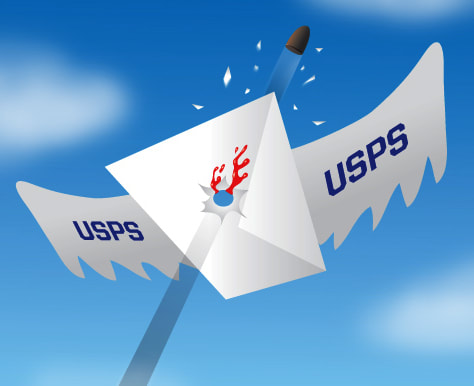 The U.S. Postal Service is a horrible mess right now. The U.S. Mail has been working in the red for over five years and has to make serious changes to its business model to survive. They need to cut about 6 billion dollars in expenses a year for the next 5 years just to make it a profitable service, or the whole god-forsaken thing is going to collapse into itself like the house at the end of the movie Poltergeist.

I’m sure many people will happily weigh in on what is making the U.S. Mail such a functioning train wreck… Too many facilities, too many workers, unions, pensions, lazy employees and the list will go on.

One thing is for certain and that is the whole mail system was never reworked after the email boom of the early 90’s. It’s possible that the “numbers” may have been skewed because of the heavy package traffic coming in from eBay sellers and on-line shopping sites like Amazon. Now, over a decade later and a significant emphasis on internet bill paying and document transfers, the whole system needs to be torn down and rebuilt.

Unfortunately that won’t happen. They’ll tear it to pieces and then duct tape the thing together like children making a fort from a bunch of Priority Shipping Boxes. The U.S. Government won’t help financially or in any other capacity because our government is completely incapable of functioning properly itself. The U.S. Mail is a government operation, but it doesn’t operate with government funds—It runs on profit and like a lot of unwieldy businesses, it’s become an out-of-control gorilla completely unable to get out of its own way. In fact, the U. S. Postal System owes the government a crap-load of money… give or take a few billion.

Now the U.S. Mail is eliminating First Class mail along with other immediate cuts to the delivery system. Your mail will actually start coming to you slower, which gives new meaning to the term Snail Mail. We may have to find another bug or animal to denote the paper mail system. How fast do amoebas go?

I actually feel sorry for the people employed by the post office—the common postal worker we see face to face. Many of us in the public sector have stamped them as gruesome malcontents with terrible attitudes and dispositions that make the heydays of the Grinch seem like Tinker Bell after a few champagne cocktails. But after years of being an enthusiastic eBayer, I got to know my local post office workers quite well and all of them cried about the strict browbeating they received from managers who watched over them with a critical eye and even breathed down their necks to analyze performance. The window staff were forced to parrot the same spiel over and over to each customer (“is there anything liquid, fragile or perishable… do you need any stamps, money orders…) sometimes 200-300 times a day. It’s a tough and sometimes humiliating job that is rarely rewarded and almost always exhausting.

The U.S. Postal System is planning to eliminate 28,000 jobs in 461 facilities—and more later on in 2012. We should all be quite concerned over this news. This is a huge chunk of people flooding into the employment circle, many of which are probably not trained to do much of anything but work at the post office. Which means the unemployment lines will get longer and America’s patience for just about everything else will get a whole lot shorter.

With computer use on the rise, people are already doing more personal postal work than ever before—printing their own stamps, paying off bills or simply transferring files electronically. The days of going to the post office are numbered, with the resurgence of Mom and Pop stores providing postal service and even places like drug and convenience stores becoming the new home of postal centers nationwide. It’s actually already happening.

The price of gas and jet fuel is skyrocketing, making the cost of shipping packages shoot through the roof. This may force businesses to slow down or simply eliminate their shipping if they can help it. There’s a whole trickle down effect of this postal system reconstruction and it’s difficult to see where the future lies right now.

Saturday mail delivery is also going to be eliminated as well as other small perks we’ve grown accustomed to since the dawn of the Pony Express. So things are about to get worse long before they get better. And with the U.S. Mail talking about eliminating employee health benefits and retirement programs, shit’s about to blow up.

I think the people affected most by these changes will be the elderly. Many old folks don’t even own a computer, let alone know how to use one. They’re talking about eliminating the post office in my hood and I can’t image where the frail old ladies that I see shuffling around the joint are going to go. There’s another post office about 15 blocks away, but you might as well tell an 83 year-old lady with a walker to climb Mount Kilimanjaro if you’re going to ask her to go 15 blocks.

So here we are. The future of technology has made tangible mail almost completely obsolete. UPS and Fed Ex are going to profit from package shipping while the U.S. Mail is bogged down in red tape and a broken service system.

Maybe someone will hurry up and invent one of those transporter things that you see on Star Trek. Now if we can just avoid traveling through the other side with giant fly heads, we’ll really be on the road to great things.