IT'S JUST A FANTASY. IT'S NOT THE REAL THING. 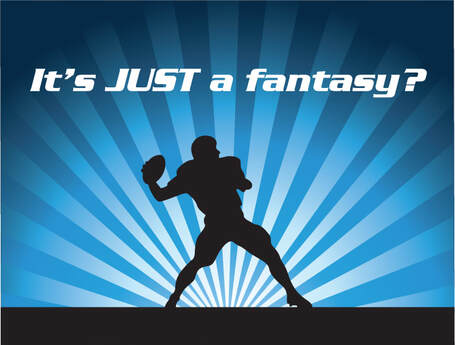 This is a stat that is thrown around about three times a year in some article written by a guy who needs to fill some kind of financial news quota on Marketwatch or CNN Money. The article occurs three times a year because it coincides with the football, baseball and basketball fantasy sports seasons.

It’s an easy article to write because it practically writes itself. All the writer has to do is factor in all the time spent on playing fantasy sports online during the working day and equate it to money. It’s also an easy article to plug into a website when the news and the creative writing slows to a grinding halt. It’s a safe article to keep in the archives and bust out every four months.

But the big mistake in the whole equation is factoring time with money. Obviously time is precious and is worth a lot of money; tons of money really, but that’s discounting Fantasy sports as a time waster and nothing more. In essence, Fantasy Sports is not only an exercise in team building and creative management, but an excellent mental exercise in problem solving and for stoking the fires of competitive juices.

‎U.S. companies spend up to $511 Million per month on company management educational programs and team building seminars. OK, I completely made that last sentence up, but it’s totally plausible, right? I’m sure U.S. companies spend a ton of money on that stuff when most people are self-educating, through fantasy sports, all kinds of management skills. Trust me, I’ve been in some of these team building seminars and the only thing they build is team whining and blame skills. I’m sure there are more productive methods to build constructive team skills and trust then with some of the dreadful sessions I’ve been a part of.

Think about this. Throughout your fantasy season, you’ve made at least one or two trades, pickups or roster moves that made you sit back and say “that was a brilliant move.” Right? Tell me you haven’t been completely pleased with yourself over a move that got you a win or advancement in the Fantasy rankings.

Why wouldn’t that apply to job management skills? If you hire someone that brings extraordinary skills to your department and helps you win a case, or land a deal or nab an account, you are praised as the one who saw the potential in the person and brought them into the group or the department.

Fantasy sports helps you see above the norm, make desperate decisions and take chances with people that you might not ordinarily take. Sometimes you have to work with a crew that makes you nervous, but if you play those people to their strengths, you win! Now, Am I talking about fantasy sports or the workplace? Hmmmm? SEE?

I work in the creative field and we don’t have the copyeditor doing photoshop work, or the photo retoucher writing catchphrases. That seems simple enough, but sometimes lines can get blurry and doing things out of the norm can carry you through. Maybe the copyeditor and the photoshop guy have worked together for 15 years and on a particular job, might knock an idea out of the park. Creative team construction and proper leadership can guide a team to a huge win.

Bruce Lee had a million beautiful thoughts and philosophies, but one that always stuck with me was about training. Basically the thought was that if you train a particular muscle, train a particular defensive move or a strike and train it to perfection, that when the moment comes to use it, it requires no thought what-so-ever. It happens (the strike, the defense block) automatically like it’s a part of you; like it’s second nature. Well-trained people in the art of working with what you got is an art unto itself. And all Fantasy teams are a work in progress and under construction and require research, training and a few brilliant and lucky ideas to make it work. It’s excellent training for applied workplace paradigms.

Now, I realize that also the opposite can happen. Trust me, I’ve made some serious fantasy lineup boners in my day and it’s cost me. The thing that has killed me the most though has been to second guess my decisions and go against my gut. That’s when I lose. But It’s done in a safe environment where I can try those things and only hurt my fake team and not my real team. When I learn, I apply it to real life and I almost always come out ahead. Most bosses could only dream of an online training program that tests management and team building skills in a safe environment. But they have it and it’s at their disposal. They should REQUIRE their employees to have a sports fantasy team!

We all make mistakes and let good people go, or change things when they should have been left alone, but in the end we are probably all mostly successful than mostly unsuccessful. The people in your fantasy league who do the worst are actually the people who take the least amount of time on their fantasy team. That neglect kills their season. Do they neglect their work life the same way? I don’t want that shiftless layabout on my work team!