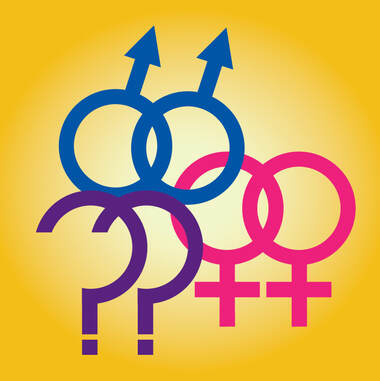 I’m all for gay rights. In fact I encourage gay and lesbian couples to get married because (as Chris Rock once said) they deserve to be just as miserable as us straight people. We live in modern times and we need to accept everyone on this planet for who they are. We need progressive leaders making real world decisions based on all people and their real lives. There are gay people in the world—Get over it! Stop thumping your Bible, Kuran or whatever other ancient tome you’re making your life’s philosophy about and simply deal with these facts.

Now that I’ve gotten that off my chest, I need to reach out to the homosexual folks out there... Why is it every time I see a news clip or photo online about gay marriage or gay marches, I’m forced to watch the fattest, ugliest men mashing faces to support said cause? It’s horrible! I realize it takes all folks, but I think it behooves the gay community to start getting a better looking selection of people to be the poster children for the movement.

I mean, if I have to see two more short, fat, pot-bellied, balding 55 year-old-men who look like my old high school gym teacher make-out in tuxedos one more time, I may just start turning my vote in the other direction. Why can’t we see two attractive young men or women in any of these news stories or photos? WHY? I’ve seen them around here in New York City. They’re EVERWHERE! Can’t we get them in some of these photos?

This is what is killing the gay rights cause in the eyes of middle America in my opinion. I think a good number of people could understand gay rights better if they could relate to it better on some level. Do they HAVE to see two guys who look eerily like their father and the local auto mechanic, tongue sampling each other’s tonsils? Can’t they see a guy who looks like, I don’t know, James Franco and Justin Timberlake exchanging vows and kissing eloquently to seal the deal? Is this really so hard?

Your Average Joe Shmo Americano can’t even watch unattractive straight people kiss. It gives them that yucky ‘I just watched my parents kissing’ type feeling. What do you think goes on in their minds when they see two unattractive gay men or lesbians kissing? It rocks them to the core!  Their brains recoil in terror. Put yourself in their shoes for a moment. They need to adjust mentally. They need brain training. We need to ease them into this stuff slowly—gently, like dipping their asses into a bath of hot water. Not tossing them bellyflop-style into a scalding tub.

I blame the news as much as anyone, of course. They’re the one’s who are out there getting this footage and snapping the pics. But what about gay photographers? Why aren’t they out there snapping shots? I’m sure there are boatloads of gay photographers and camera people. Can we get them on the job? Please? This is out of control!

We have a new election coming up and with the recent wave of GOP nominations and their ultra conservative views huffing and hawing, the gay community is in for a barrage of hits that they need to defend themselves from. Rick Santorum and his religious zealots are happy to blend Church and State like they’re whipping potatoes and heavy cream together. Ultra-ULTRA-Conservative Santorum shockingly threw the gay community a bone recently when he declared he’d “love” his child if they were gay. This is about as much sympathy as homosexuals are about to get from a guy who would just as soon burn them at the stake then give them any rights, so it’s something to build on if at all possible.

Not that Santorum would ever accept gays as actual people, but there are Santorum-like people who are probably on the fence all over the country. They sit at home and say, “You know what? Live and let live. If gay people are happy, then they should have all the rights in the world. They’re people like all of us and deserve everything we straight people do.” It’s a beautiful vision and it’s actually happening. These people come home from a hard days work and sit down to a good meal with their loving family and think, “Everyone should have this.” It’s the American way. Then after dinner, they sit down and watch TV and see two guys who look like their hairy bowling buddies French kissing each other’s intestines and they go, “For the love of GOD, I don’t want to see that!” and those kind thoughts they had festering of everyone being equal, go right out the window.

Listen, I’m not saying we have to disguise the true gay community. I’m not saying people need to hide. I’m not saying we need to turn gay rights into a staged photo shoot that has staged actors playing the parts of people that don’t exist. But it couldn’t hurt to get a little visual PR in the right places, right? I can’t be the only person who thinks this. There HAS to be some people, especially in the gay community who think the image could use a little “Polishing Up”, for lack of a better term.

I have many gay friends. All of them range across the spectrum in looks and body size. I’m no prize-winner myself here either. All I’m saying is that for the health and long-term goal of acceptance towards the gay community, they need some polishing up. These things take baby steps though. Good-looking baby steps would help…