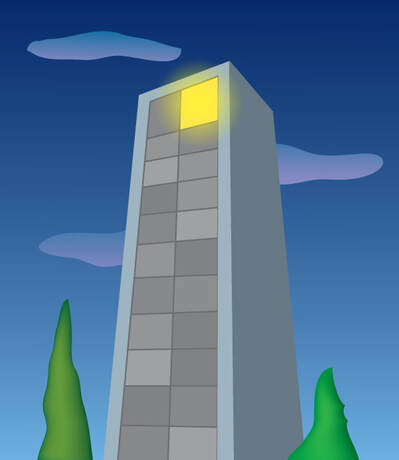 I recently moved into a new apartment and it was more stressful than… nothing, really. Moving is one of the most stressful things we can do as a society. Putting your valuable stuff into the hands of men who may or may not be a few brain cells short of being institutionalized is jarring enough. But jamming your entire life into boxes and uprooting everything you know and going someplace new is wildly nerve-wracking.

Everything about the process is rattling—changing your address, notifying the post office and contacting every organization that sends you mail. Rerouting your utilities and cable service. Packing, unpacking, cleaning and organizing all while trying to live a normal life is nothing short of maddening. Moving can take a week or two to complete and each day seems more clustered than the next. And I didn’t even mention the whole process of FINDING a new apartment. That took like a month of dealing with near maniacs on the phone. Once you get the word out you’re moving, it’s like blood in the water—real estate brokers start swarming like sharks. I got a call from a broker in Colorado about an apartment in NYC. Colorado… Jeez.

Including a rapid slam-bang routine on a crisp Autumn morning to my first apartment on East 13th Street in Manhattan, I’ve moved a whopping 7 times. Each time it’s been more stressful because as I’ve gotten older, I’ve accumulated more stuff and now I have a family. When I did it in 1997, I had a futon and a toothbrush. Now I have computers, multiple furniture sets, endless boxes of stuff and of course, a wife and kid and all their stuff.

Each time I’ve moved it’s been a learning experience for me. I realize I should have done something different, or remembered a tip that really made things easier. I once cut out an article in a magazine on tricks to moving and had it for five years. I threw it out about a month before I realized I had to move. Now I’m passing what I’ve learned on to you in case you find yourself having to bail out of your place because your neighbors headboard bangs against the wall when they have sex, or the people upstairs are addicted to tap dancing, or you simply need more space.

Some of these tips will be much more relevant to city dwellers, but they’re universal in many ways as well…

Check out the new place a few times
Hang out in the place you plan to move into a few times and at different times of day for noise and other random problems. You can’t sleep there to see if a bus drives by every 25 minutes on the graveyard shift, or if the McDonalds delivery guy parks under your window at 2AM and smokes a half pack of cigarettes, but you can get the gist of the place by going there a few times. Also talk to the neighbors. Is there something unusual about the place you didn’t notice? Does a train whistle go off at 5:45 every morning? Is the neighbor your asking all these random questions to seem like a complete and total lunatic?

Pantomime the place out
Literally go in and pretend to do stuff in your place. Make sure you can brush your teeth properly without banging your elbow against the wall and see if you can open the stove without hitting the fridge. A lot of people will say, “I can’t look in the mirror unless I turn at a 90º angle, but that’s OK.” If you can’t brush your teeth properly the first time, how do you think you’ll feel after your 437th attempt to squeeze your body into the narrow alcove the deranged designer created to polish your pearly whites?

Make sure all water is running properly
Try out ALL the faucets for pressure and hot water. Taking a bath in brown water because the building your thinking of moving into was built when George Washington was a Private in the Army, ain’t going to cut it. While you’re at it, open the windows and the fridge, test the gas stove and anything else. The shower has to be great. Try it all out!

Scan the place for minor defects
Make sure shit isn’t broken in the place you’re moving into. Once you sign papers, the landlord basically tells you to F-off. If you didn’t notice that half the windows were broken when you moved in, it’s coming out of your security deposit when you move out, and sometimes they can bang you pretty hard.

Negotiate a price drop
Ask for cheaper rent. What are they going to do? Send you to Afghanistan? The worse they can do is say is no and sometimes it actually works.

Change your address immediately
Once you have a new place, change the address immediately at the post office and other places that are crucial to your life. The Post Office can take anywhere from 7-10 days to process your move and some places take a certain amount of business days to do this as well. You could miss some valuable mail—like that letter from the lottery that you’ve won or a bounced check notice on your new apartment from the bank…

Get boxes from liquor store
In Manhattan where I live, there’s a liquor store every ten feet, so it’s a pretty easy to bop in and get boxes. Some people spend hundreds of dollars on boxes and that’s nuts! Go to the liquor store at THE END of the day (5-6PM) and ask for boxes. They’re usually done unpacking any shipments and have lots of cardboard laying around. They’re more than happy to get rid of them because they’re tripping over them and they take up valuable store space.

Pack light and heavy together
Want ALL your shit broken into pieces by angry movers at the end of the day? Pack tons of boxes full of books. Make them about 100 pounds each and see what happens. This is a HUGE no-no. I have tons of heavy art books and other pretentious coffee table books, so I’m an expert at this. Pack books with light stuff like sponges, dish towels and maybe shoes. They fill up the space and balance out the weight.

Garbage bags are your friend
Get a few boxes of heavy duty garbage bags. When you move, you’ll throw out a TON of worthless junk you didn’t even know you had. You can also use the bags to move your clothes. Toss in jackets, underwear and stuff you don’t mind getting a bit wrinkled or can easily iron out later. It saves time and money and the movers like them because they’re easy to haul.

Get quality movers
The difference between movers who charge $100-300 (shit) $400+ (good) is enormous. Hire legitimate licensed movers who won’t break or steal your shit. Even if you hire a bunch of dudes in a big van, keep them legit by watching them tight and reassuring them you’ll tip well. It makes a difference knowing they’ll be rewarded for humping lots of heavy junk.

Have the movers come in the morning
Never hire movers to come from Noon on. Most guys try and squeeze three jobs in per day and they ALWAYS run late because they usually get some crazy lady who insists on having them rearranged her bedroom set 15 times before they can leave. By the time they’re onto you in the evening, they’re hours late and exhausted. That means they’ll be careless and break your stuff and generally toss it around like it’s on fire.

Have the movers move everything!
Don’t think you’ll do one or two things yourself. “I’ll move the TV, my computer and a few boxes myself because they’re valuable.” Those things are crazy heavy and you may find yourself doing a mini move on your own and it’s a pain in the ass. I know movers can seem shady, but have them move your 98” HD TV and the computer. Your back will thank you later and so will your buddy with the Honda Accord you made miss an entire Sunday of football to move your stupid crap.

Have the takeout menus ready
Plan before and have a delivery place in mind to have food delivered to your new apartment. Chinese is a no-brainer because you can eat out of the containers and re-introduce yourself to using chop sticks again…
Some other helpful tips to think about:

ROOMMATES
​If you are getting a roommate, make sure you are both gainfully employed and on the same life philosophy plan. Nothing can be more stressful than a roommate that suddenly loses their job and is unable to cover the rent. And just as bad, a relationship that turns sour because you didn't realize your roommate liked Salsa Dancing at 2 a.m. or... is simply a jerk.

RATE INCREASES
​Even though we're all busy people, you should get to know a little about rent law, what your legal rights are and how rent increasing works. Most landlords these days rent to people based on "Riders" which means they rent to you based on an agreed price and not what the actual value of the apartment rental is. Meaning, they can rent to you at a certain rent, say $3,000 a month, but they can increase the rent a certain percentage of the apartments rental value, which could be $5,000 a month. So if the law says they can increase the rent by 5% a year, they will increase the rent 5% of $5,000 and not $3,000.

BED BUGS
​There's been lots of talk about bed bugs in the last few years, but honestly, bed bugs are pretty rare. But you do have the ability to look online to see if your building has been flagged for fumigation and if there's been a reoccurring problem.

NEIGHBORS
If at all possible, find out who your neighbors are. I've had some real bad ones over the years and even though getting a good place at a decent price is difficult, bad neighbors can really upset your quality of life.
And there you have it. A blueprint for moving! I’m sure I forgot about 87 different things that could help make your move more smooth, but I did my best on this one. If you can think of a helpful hint, please feel free to add a comment.