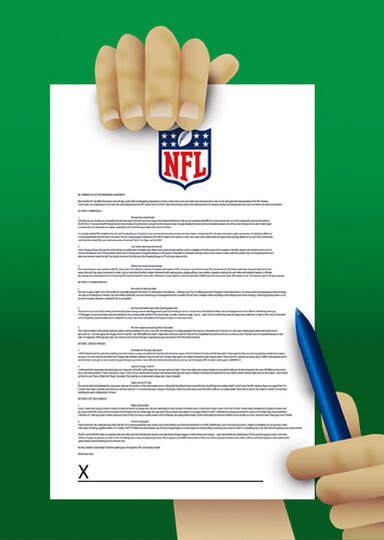 Every few years, the NFL deals with a new Collective Bargaining Agreement and it’s time we fans had a voice and made some demands of our own. As the self-appointed representative of the NFL fanbase, I have made a list of grievances of my own that need addressing by the NFL owners and the NFLPA. These demands are whole-heartedly backed by the majority fanbase and desperately need to be met before we watch any football…

1. WE WANT LESS COMMERCIALS
​One thing we can all agree on universally from the east coast to the left coast (and maybe even England & Mexico) is that we are inundated with WAY too many commercials. It’s mind numbing! 20 commercials before kick-off, then a 12 second kickoff followed by five more minutes of commercials is enough to drive anyone insane. Enough already! No more commercial breaks between kick-off and start of play. And we don’t need to jam a commercial in for every time-out called—especially at the end of the game when they call a lot of them. We also need to eliminate the TV timeout as well. Referees calling commercial breaks is a crime against sports humanity!
​
I’ve actually watched NFL football in the U.K. and it’s really pleasant. They don’t show commercials every five seconds and when there is a break, they fill in the time with expert studio commentary. So refreshing. While we’re being bombarded with ads here in the states, the U.K. is getting game analysis from former players and coaches in calm, clear voices and it really makes the game more exciting. Maybe we can pull a few commercials and have this instead. Wait, you need every penny of revenue? Sorry. My mistake.

2. LESS PEYTON MANNING COMMERCIALS
Listen, the guy is funny. He’s got the comic timing of a professional comedian and a down south, good-ole-boy attitude, and he tends to play against type, which makes it even funnier. And anyone who has full control over his mental and physical comic timing abilities tends to have a strong grasp of tangible qualities on the gridiron as well. That's what made him an all-time great. Being able to anticipate what your fellow comic needs to make a joke kill is pretty close to anticipating where and when your receiver needs the ball. I’m a big fan, but even Colts and Broncos fans are sick of seeing this guy on TV. Let’s put a leash on him.

3. REDUCE THE VOLUME OF COMMERCIALS
This is becoming not only a problem with NFL games, but in the television universe all together. But maybe the NFL can jump in and buck the trend. The commercials are 387 times louder than the game itself and it’s obnoxious. Not only that, every commercial is a beer, truck or some kind of athletic related commercial with wailing guitars, people yelling at one another and guys smashing into each other with extreme intensity. Is Michael Bay making these advertisements? Are they using THX Surround Sound? It seems like it. Whenever I watch a game in a bar, the bartender ALWAYS turns the commercial audio off and plays music. This may be a sign for things to change.

1. NO MORE FOX DANCING ROBOT
This one is a given, right? Isn’t it time to kill the universally despised FOX robot? I’m talking about Troy Aikman… Kidding! Love Troy. I’m talking about the CGI graphic robot that dances, runs, jumps, points and plays guitar while annoying the crap out of everyone in America. Not since Gilbert Gottfried’s voice has something so inconsequential been so reviled. The fact that it changes outfits according to the holiday is even more annoying. A dancing, jumping robot in a Santa hat is enough to boycott a channel for life, in my opinion.

2. NO MORE ANIMATED HEADS WHILE SHOWING PLAYER STATS
This irks me to no end. There’s nothing more disturbing than having someone like Matt Ryan’s giant face blinking at me for a minute and a half while his athletic stats are displayed next to him. What’s it like filming these guys? “Ok Matt, can you stand there and stare blankly for three minutes while we film it? Try not to laugh, or smile, or look too tough. Just be… plain.” Once in a while they have the players toss a ball back in forth in their hands so they don’t seem completely uncomfortable, but it’s still painful to watch. Just show a still graphic of the player and give me some quick facts.

3. NO MORE PLAYERS ANNOUNCING THEIR ALMA MATERS
This one is not universal, but there’s a good chunk of fans that feel the way I do about this. This relates to the talking head issue above (Sec. B #2) and has perplexed me since I was a kid. And although I’m a college graduate from Syracuse University and I’m proud of it, I don’t give a flying prairie patty what school the players went to—not even when they’re (gasp) an SU guy. You’re in the NFL now. What difference does it make what school you went to? They do this in basketball too and it drives me nuts there as well. They don’t do it for baseball because no one cares. It’s regression. We’re big boys now. Let’s move on and not live in the past. Especially you guys who went to THE Ohio State University.

1. ELIMINATE THE THURSDAY NIGHT GAME
I LOVE football more than just about anything, but what makes it so great and distinctive than the other American sports is that it’s limited to Sunday and Monday night. It feels special in that way and only getting a weekly taste makes you crave it so much more by the week’s end. People make football a weekend ritual and with the Thursday night game, that religion-like pattern gets watered down. I don’t have NFL network (as well as about 5 billion other people) and most of the time I can’t get to a bar to watch the game because, you know, I have a life and a family and shit to do and can’t go out till midnight (EST) to watch a damn game. ELIMINATE it!

2. STOP THE VINTAGE UNIFORMS
I understand that jersey sales and sports gear are a huge part of the NFL profit margin, but can you name one team, I mean one single team, whose vintage unis are worth looking at, let alone buying in the store. NO! Why are they torturing us with these uniforms? They’re ridiculous! I mean, c’mon! Have you see the Broncos brown and yellow striped gear? Pathetic! And the Jets “Titans of New York” blues? Just awful. They look like an underfunded college team. And what’s the deal with the Steelers yellow helmets while we’re on the subject. They’re heinous! Stop it already!!!

3. FIGURE OUT THE OT RULES
This one has been hotly debated for many years, and over the last four or five, have heated up to a rolling boil. Should both teams touch the ball, should they have sudden death? I don’t know. The NFL needs to figure out a good Over Time system that makes complete and total sense and then hammer it in concrete and never change it. Personally, I think once both teams touch the ball on offense, it’s sudden death. Seems like an easy fix. But what do I know? I’ve only been watching this game religiously for 40 years.

4. FORGET THE 18 GAME REGULAR SEASON SCHEDULE
I don’t get this. Yes, owners and players want more money, but NONE of the players want to grind out two more hard-hitting games, and the fans in general don’t want a watered down product. Keep the current 16 game schedule intact. If it ain’t broke, don’t fix it!!!

1. PLAYERS GOING BROKE
Listen, I realize we’re giving millions of dollars to kids and they’re not always from the best upbringing or have the best mentalities, but it’s time to get things in order. The NFL should make it mandatory for players to invest money in stock and 401Ks, which can’t be touched until the players are of a certain age. That way when they’ve blown every dollar on Las Vegas hookers or their 15 Bentley are rusting out and worth 2 cents on the dollar, they have something to fall back on. These guys play a violent sport and some of them are nuts, so arrests and jail time are part of the landscape. But going broke by age 35 after having absurd amounts of dollars in your pocket is a crime. Someone teach these guys how to invest!

2. OWNERS CRYING POOR
Listen billionaires. We understand you didn’t get this rich by being stupid with your money, but if you’re staking your financial investments in an NFL football team, you’re in the wrong business. I realize it’s profitable, but no one buys an NFL team with hopes of making a gajillion dollars. It’s a hobby. THAT’S IT! Make sure that whatever you did to be disgustingly rich is what’s keeping the money rolling in and enjoy your team for what it is. Something fun to do. Shut the hell up about your money!

But hey, I love football, baby! Thanks for getting your shit together, NFL and making it work!