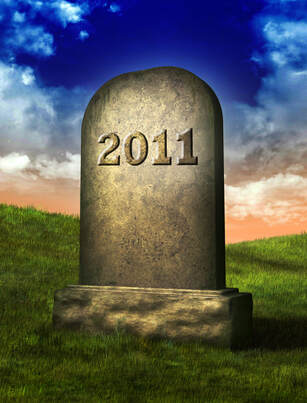 I’m not one to live in the past, but I don’t really like going around telling everyone to have a Happy New Year until we’ve properly mourned the death of the old year.

I’ve never felt particularly great when December 31st rolls around. I usually feel static and a bit depressed—a bit muddy, I guess. While most people have glitter-laden cardboard hats screwed to their skulls, or prancing about in black-tie attire and sipping cheap champagne, I prefer to sit quietly and wince at New Years Rockin' Eve in HD while contemplating the difficult year that just passed by.

My year was difficult mainly because of an onslaught of health issues for my family. I don’t think I had it any better or worse than anyone else, and I whole-heartedly accept a cheer of “Have a Happy and Healthy,” but I can’t get there until this old year is truly laid to rest. I need to have a cathartic review of the year and bury it in its proper place in my soul.

The year worked very hard to give us the ups and downs that we so enjoy reviewing and analyzing at year’s end. We make lists on the best of everything that happened during the course of the year—the best books, movies, iPhone Apps and television shows—these things will be neatly wrangled into a grouping and laid out for our light reading pleasure. Lists of restaurants, influential people, websites and whatever someone can conjure up to rate into a top-ten list will most certainly be listed. People like tight packages with things buttoned up for their ease of use and a top-ten list is pretty easy to swallow.

Sometimes these lists start at the beginning of December, propelling us to exclaim “Hey, there’s 1/12 of the year left!” Especially since this is the time that filmmakers flood the market with their Oscar-bait releases; it seems premature to make a list of the years events before December 31. But that’s just me.

Time magazine released their person of the year in early December, but unless someone came along at the tail end and cured cancer, I guess that one was pretty much wrapped up without subject to change.

Even though the nightly news works so hard to give us the most brutally miserable point of view and the most horrible news stories we can possibly imagine, they wrap the year’s events in a gift of positivity and lay it out for us to review. Still, the year deserves to be examined and evaluated. They say we learn from our history and that’s true—even if it’s recent history.

And we have to take the bad with the good. Even though we don’t make top-ten lists of murders, court trials and terrorist attacks, these are things we need to look at as a whole and see how they’ve impacted us. It’s human nature to lock bad memories into a corner of our brain that makes us forget, so a quick overview of the human race’s unfortunate missteps helps us put things in perspective.

So as the year comes to a close, I sit back and sift through the madness and let it all process so that I can forge on into the new year. You can do it while standing in the freezing cold of Times Square, pretending to have fun even though you haven’t gone to the bathroom in six hours. You’ll kiss and hug and yell, but I’ll be quietly thinking about the past and trying to figure out how to make 2012 the best year I can.

Before we move forward, we should look back and mourn the old year. So if you see me in the street, and you’re so inclined, shout out “Sad Old Year!” It will make me smile and help me to move on.