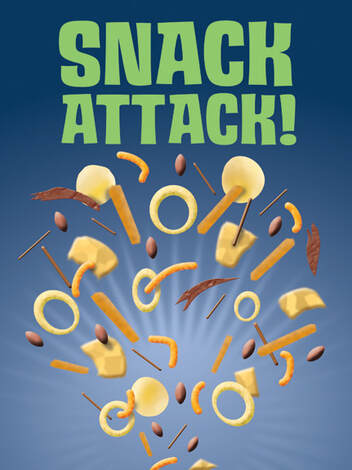 My brother posted some really boring blog post about Jazz albums, so I figured I’d counteract that snoozefest with something you people REALLY want. Something you people can actually use in your daily lives. That’s right, a list of the most Underrated Snack Foods! Tell me that’s not better than a list of some old Jazz dudes who’ve been dead for like 100 years. Huh?

Anyway, to compile this list I had to do some serious snacking. Research is at the heart of this project and I made sure I got down to the nitty gritty. It took hours and hours of gorging, crunching and munching, but when all was said and done, I got the facts right. The results: The best underrated snack list your gastro-intestinal system could possibly ask for.

What makes this list so special is that it’s a list of snacks that aren’t always reached for when dashing through the aisles of your local grocery store. Some are hard to find and some require extra footwork to get them to your face. But the payoff is worth it. So the next time your craving a little nibbley-something before dinner, try one of these alternatives to the common snack. 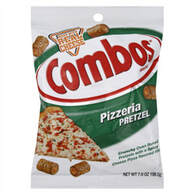 I haven’t seen a commercial for Combos in like 20 years or so. But when they were on TV, their tagline was “Combos really cheeses your hunger away.” See what they did there? Replaced chases with cheeses. Yea, I know—worst copywriter ever. But that’s not what has made Combos fly under the radar for so many years… Honestly, I don’t know why it flies under the radar. It’s a great snack! Real cheese stuffed inside a pretzel nugget. Perfect size and a really great taste. In a perfect world, the pizza Combos would be the number one snack food in America. Maybe it’s the pretzel thing, as not everyone likes pretzels. But Combos are a great snack and they really do cheese your hunger away. Hmm, maybe that’s actually a great tagline! Guy’s a freakin’ genius! 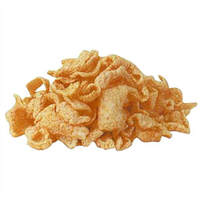 Bacon flavored snack crisps. Did you hear what I just said? A snack crisp that tastes like bacon. Hello? Nobel Prize anyone? Why isn’t everyone and their sister eating pork rinds? Why aren’t you eating them right now? Basically because their fried puffed pork skin. Ohhh. Uhhhh… OK, well, I realize that’s not super appealing and many won’t eat them for religious reasons, but shit, if they aren’t super bacony! Once in a while you should get your trailer trash on and snag a bag at the market. They go great with an afternoon bowling tournament and ice-cold beer or five. They’re also pretty popular in many countries like Brazil and Argentina, so if you eat them, you’ll be continental as well. 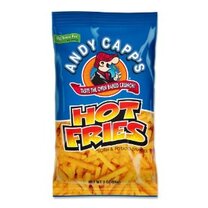 What other snack food is based on a comic strip about a British drunk who neglects his family in leiu of getting bombed at the local pub? None other than Andy Capp’s Hot Fries! They’ve cornered the market on British-louses themed snack foods. What’s great about Andy Capp’s Hot Fries, and the Cheddar Fries as well, is they’re actually a hearty snack food. I’m not going as far as to say they’re like real fries, but they’re not some chinsey air-puffed snack like so many other snacks can be. And even better is they’re baked, so they actually have a nice non-greasy taste. These suckers have been around since the 70s, yet not many folk even know they exist. Grab some of Andy Capp’s Hot and Cheddar fries! It’s better than drinking all night with your pub buddies… barely. 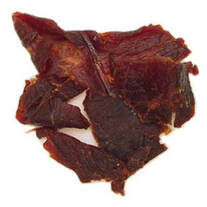 The old stand by. The staple of every cowboy in the land from Australia to Texas. But it’s not just for cowpokes! Beef jerky is a snack that everyone can enjoy. Except vegetarians. They apparently don’t like eating meat, which is equivalent to not liking the sun, or Christmas or something. But if you’re a carnivore like me, there’s nothing like some good old-fashioned beef jerky. After extensive research in this department, I’ve found a few brands that I really like… Mingua Brothers—a fine cut of jerky from Kentucky. Umpqua Native American Jerky—Hand trimmed jerky from the Cow Creek Band of the Umpqua Tribe of Indians in Canyonville Oregon.Uncle Mike’s—A soft and super tasty jerky from Ohio.Vermont Beef Jerky—one of the best in the country from the fine people of Vermont. Use this information wisely my snack loving friends. Beef Jerky can be seriously addictive and make you a connoisseur of these meaty treats. 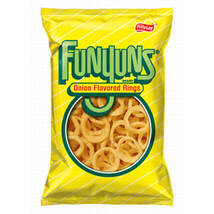 There are imposters out there! Don’t be fooled by snack foods calling themselves Onion Flavored Rings. No, that just simply won’t do. Stick to the one and only Funyuns. These guys give you a serious blast of tangy onion taste in a solid ring of crunchy joy. They’re totally awesome! But much like its unrelated partner in the cereal universe, too many at once can tear up the roof of your mouth like Cap’n Crunch. If you’re not careful, it can feel like a bunch of New Zealanders had a championship rugby match on your palate. Still, this is no reason to pass them over. They’re just about as reliable of a snack as the sun rising in the east. 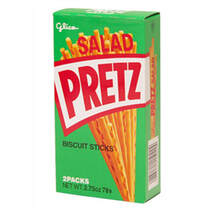 Speaking of the East, it’s the perfect time to talk about Pretz! These skinny little pretzel treats from the fine people of Japan are as compact, efficient and as tasty as the wonderful folks who make them. How these haven’t caught on more in the USA is a mystery to me. They’re the ultimate bag lunch treat! Each box comes with a bunch of shiny foil packs that are easy to toss in a lunch box. My personal favorite flavor is Pretz Salad, but they’re all super tasty and they come in an astonishing amount of flavors—something like 80 different varieties. Fun to eat and mondo delicious! Get to your nearest Asian market now and buy a few boxes! Also check out Pretz’s sister snack, Pocky—skinny cake sticks dipped in chocolate. 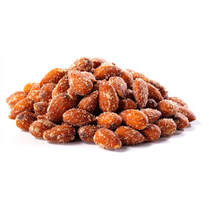 I’m usually reluctant to toss a nut into the snack competition ring, but almonds stand out from their nutty brothers. Actually, I think almonds are seeds, but I’m not here to educate you on nuts, seeds, legumes, or any other kind of tree embryos. I’m educating you on stomach stuffers and almonds are a satisfying addition to the list. But you have to go with the smoked almonds. Popping plain raw almonds is kind of like eating tree bark—after about three, you’re chugging water and reaching for the Funyuns. But smoked almonds, with a nice coating of savory, smoky salt is just what the taste buds need. Also almonds are filling and good for you—so they say. I’m not freakin’ Doctor Oz here, so eat what ever the heck you want. 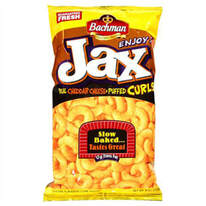 If you ever go to a big supermarket, there’s about 47 different kinds of cheese puffs on the shelf. It’s impossible to differentiate which ones are better than the others because they all have that neon orangey glow. You either like the puffy ones or the crunchy ones; then you look in the little bag window to see which ones seem to be the most appealing and toss them in your cart. But there’s most definitely a difference. Jax Cheese Curls are the best, most flavorful cheese puffs by a long shot. They have a nice soft crunch and a fantastic real cheese taste. In reality, if you took a bag of any cheese puff on the market and crushed them into dust, it’d probably take up about one square inch of space. Jax Curls might take up about two square inches of space, which in the world of cheese puff real estate is the equivalent of owning a mansion in Manhattan. 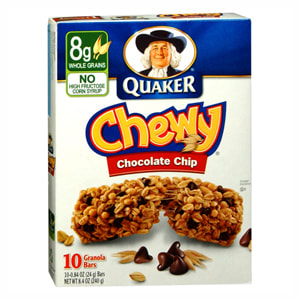 Here’s a challenge for you. Eat one of these bad boys and try not to think about eating the entire box in one shot. I guarantee you’ll consider tearing through it like a California wildfire—they’re that good. Chewy granola bars are pretty dang tasty on their own, but they snuck chocolate chips into these suckers and kicked up the appealing ratio a notch or two. It totally satisfies a chocolate craving AND it puts your health monitor at ease because it’s granola. I realize that these are not the healthiest granola bars on the planet, but hey… It’s better than eating pork rinds, right? Most people will be shocked that this is the only chocolate offering on the snack menu here—but I reserve chocolate as more of a sweet treat, then a stomach filling snack. 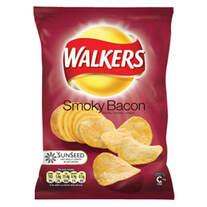 Walkers is basically the UK Lays potato chip. Personally I think Lays are horribly boring, but what sets Walkers apart from Lays is their bold practice of trying unusual and tantalizing flavor combinations. That’s right, I said tantalizing! Over the years Walkers has released tons of crazy crisp flavors like Baked Bean, Roast Turkey with Paxo Sage & Onion Stuffing, Jamaican Jerk Chicken and Lamb & Mint Sauce! Sometimes they even release special flavors for a short period or for special events. During the 2010 World Cup, Walkers briefly introduced the flavors American Cheeseburger, English Roast Beef & Yorkshire Pudding, Italian Spaghetti Bolognese and even Scottish Haggis! This is progressive snacking right here folks! They’re not thinking outside the box, they’re thinking outside the kitchen! And we benefit from these expeditions in flavor. Walkers everyday flavors that you find on the shelf are more adventurous than anything we have here in the United States. Steak & Onion, Smoky Bacon, Roast Chicken, Prawn Cocktail and Pickled Onion are staples of crisp chomping fun. You can find them here if you search around and you can usually find them in an Irish pub if you ask. Take a Walk-er on the wild side and chomp on these tasty crisps. OK, that was a pretty corny pun. Just eat them!
Special mentions:

Wasabee Peas – In a size to satisfaction ratio, these may be number one. The only reason these don’t make the big list is because they’re not filling enough. They’re more like appetizers for snacks than actual snacks. Otherwise, a homerun every time!

Girl Scout Cookies/Samoas – Most people can hammer down a sleeve of Thin Mints without thinking twice, but I believe mint should be reserved for mouthwash and not snacks. I love the coconut chocolate caramel combo of these.

Chex Mix – The only reason these didn’t make it to the main list is they put too many of those dry unsalted pretzel rings in the bag.

Tato Skins – These little suckers are supposed to be like the potato skins you get in a pub. Tasty, although they can be a little salty.

Bugles – These cones are seriously addictive. Bit too salty though.

BBQ Fritos – These deliver an incredibly hearty BBQ flavor that goes great with corn chips, but too many can make you ill.

Veggie Bootie – These vegetarian and gluten friendly snacks can be as addictive as normal cheese puff snacks.

Cool Ranch Doritos – When I asked a buddy of mine if the original nacho cheese Doritos were his favorite flavor, he said “is there any other kind?” Touché amigo.

Cheese & Peanut Butter Crackers – The old stale cheese crackers with dry peanut butter sandwiched between them? No thanks.

Pretzel Crisps – The best part of the pretzel is the salty outside, yet these totally suck for some reason.

Pop Corn – Let’s not kid ourselves, the star of this snack is gobs of butter and salt.

Oreos – Flavor wise, it’s hard to even tell the difference between the black and white part, they’re so sweet and sugary.

Twinkies – These always seem like an awesome idea until you eat one.

Snickers – Any candy bar that touts peanuts as the main ingredient gets a thumbs down in my world.