SPORTS GAMES BY THE NUMBERS 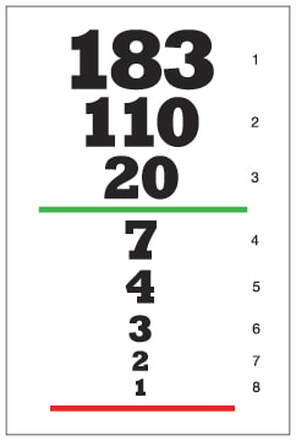 I was sitting on my couch watching some basketball and chomping on a 96 ounce bag of Funyuns that I got at Costco, when my supermodel girlfriend walked in the room and started yelling at me.

I couldn’t decipher everything that she was saying because I was busy watching the game and I generally tune her out when she yells at me, but the gist of her beef was that she couldn’t believe that basketball was STILL on the television. She couldn’t fathom that it was June and that I was still watching playoff basketball.

“When is this season going to end?” she cried. “In about three weeks.” I said.

She nearly hit the roof on that bit of news. Then when I told her that I’d start watching baseball when the basketball season ended, she crumbled to the floor in a heap. Then, when I informed her that when the baseball season ended, the football season was really starting to heat up, she went to the computer and began shopping for plane tickets to the Bahamas. And she let it be known that it was a ticket for one.

I guess on some level I can’t blame her. The sports seasons bleed into one another and if you’re a sports fan, this is heaven. Sports are on TV basically all the time, but so are bad reality shows that I have to suffer through, like ‘The Real Plastic Bitches of Beverly Hills’ or ‘The Kardashian’s Do Dallas’ or some type of show like that. Every time she has the remote, she’s watching shows about little people or shows about house remodeling. One day I’d like to see a show about a guy who collects prostitutes and have it called ‘Whoreders’— that’s a show I’d watch.

We don’t always argue about the television programming because we have shows we watch together. But I realize there has to be a compromise. She knows I’m a sports nut, but I have to pick and choose the best sports to watch or I’d be in front of the TV all day and night. And you know people need sunlight and stuff, so I broke down the sports hierarchy for her in terms of sports importance. That way, she could get an idea of what I absolutely HAD to watch, what I could miss, and how things are in relation to one another.

The first thing I did was tell her that I’m not a huge baseball fan and that I don’t really watch that much of it. Baseball has 162 regular season games and if my team was good enough to make the playoffs, play every game of the playoffs, and even win the World Series, my team would play 183 games total. “183 games?!” she yelled. “Yea,” I said with a bit of sympathy. She could not fathom the amount of games played in baseball. Her jaw nearly hit the floor.

But I quickly recovered. Before she wallowed in total disbelief, I said I enjoyed basketball, and that the NBA had far less games than baseball. They play 82 games during the season. She was upset, but compared to baseball, this was a huge difference. Then I told her if my team was good enough to make the playoffs and play in every possible game of the playoffs, they’d only play 110 games. Again, disappointed, but still slightly relieved.

THEN, while these numbers were still fresh in her mind, I told her my favorite sport was NFL football and they play just a measly 16 game a season. When she heard that news, she was so happy she almost shed tears of joy. I told her that football was only on once a week, on Sundays, and that the rest of the week was free and clear… except Monday nights… and occasionally Thursday nights... and then later on in the season, Saturdays. But if my team was to play all season and then every game of the playoffs plus the Super Bowl, my team would play only a paltry 20 games! She was overjoyed at this news!

Continuing on, I said that I didn’t follow college sports at all until March Madness basketball, and only caught a handful of games. Maybe 7 or 8 games. She was beaming with delight at this!

Hockey only required my attention for about four or five games of the Stanley Cup Finals, and she was ecstatic.

Then I told her that I only needed to watch the major tournaments in golf and that there was only four of those. She was squealing at this info!

In tennis, I only watched the US Open finals for each sex and that was only two events! She was delighted!

Then, when I told her that the World Cup was only on once every four years, she nearly leapt into my arms with glee.

These are the types of guidelines you need to layout for your girl if she’s overwhelmed by the amount of sports you watch.

Now, if you’re breaking this down and reviewing what I wrote, you may think I left baseball in a bad light. But baseball is the best event to actually go to and watch. It takes place in the warm weather and most of the time, the games are outside and you can sit in the sun. Tell your girl you’re taking her to a game where you can sit outside in the sun, drink a beer and chill out while she texts on her phone and she’s happier than a Real Housewife at a Fendi 30% off sale.

Women like to go out and be seen, and there’s no bigger stage than a baseball game where there’s a majority of men in the stands. Of course most of them are fat slobby jerks who are usually one second away from adjusting their testicles, but hey, at least it’s an audience.

So the lesson learned here is that even as a dude who loves sports, you have to make sacrifices. Even if it means cutting out a few regular season games and do stuff your lady enjoys. Give them hope that you can go out and maybe have dinner and (gulp) go to a museum. I know, I know. Art on walls and stuff. But hey, if there’s a game you have to be a part of, there’s always the radio. These days we all have cell phones with game updates, internet radio and ear buds to listen to them on.

Next time you’re in a museum, take the audio tour and plug your earphones into the game. It’s a trick I’ve used before and it works. Nod often like you’re listening to brilliant art facts like ‘why the artist was a depressing drunk’ or ‘lost his foot in a terrible bullfight’, when you’re actually agreeing with the game announcer as to why Nick Swisher spends more time on his sideburns than learning how to take a lead off of third base against a lefty pitcher.

Another trick you can use is to just go for a walk “in Town.” You know, window shop and stuff. Since I live in NYC, this is a great ruse. New York has a bar every 15 feet, so while you’re strolling, simply bop your head in or glace through a bar or diner window and you can pretty much catch every game. If you have good timing and you walk at the right pace, a nice summer stroll can have you at the window of each bar just as the pitcher is releasing the ball to home plate.

Another good trick is to keep your ears open. A lot of times people are talking about the game while they’re going from one location to another. If you have good detective skills, you can piece together the score and any major highlights from all the tidbits you hear. Just be careful as I once thought Gary Payton lost his testicle in a shark tank at Lambeau Field.

During football season, you always see people wearing their favorite team jerseys. Just ask them what the score was and by the time you get home, you know what happened in each game.

Just make sure you have your fantasy team all straightened out before you leave the house. If you’re a gambler, make sure you don’t spend too much money while you’re out with your girl as it’s likely you’ll have to pay off your bookie, Geno or have your legs broken by his cousin Johnny Bag O’ Doritos.