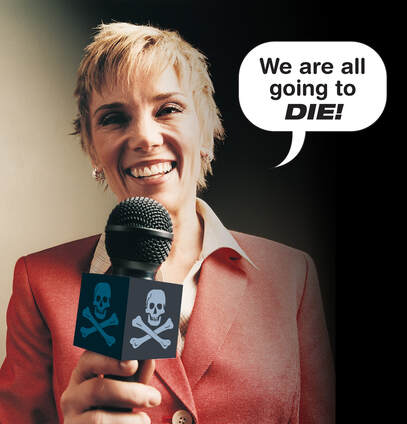 The other night I was watching a baseball game that ran well past midnight here in New York. After the game, the station rushed the 11 O’clock news broadcast on like waiters delivering steaming hot plates to a table with their bare hands. The reporters were talking with such urgency and seriousness, you would’ve thought the president was just assassinated or something. Yet the only “news” they had to tell us viewers was that a water pipe burst uptown and water was flooding into the street.

I find it hard to believe that anyone who had stayed up late to watch the end of the ball game really cared about anything more than simply going to bed or doing more of what they were already doing—maybe drinking or hanging with friends. And I’m positive that not ONE person cared that a water pipe burst uptown—certainly not anyone on Long Island or New Jersey. Yet the newscasters spoke like we were all going to die because of this burst pipe, and they were honored to be delivering this grave information to us before we stepped outside and were drawn into the wrath of the water spewing beast.

Today, everyone has a cell phone and internet access and if they REALLY needed to know the news, they could have been doing it while the game was on so as to be informed of the world’s events. Personally, I could have cared less about what was going on in the world. If it was something super important, they would have interrupted the game with a news flash. Otherwise I’m more than happy to hear about it the next day when I wake up. If it was world ending information like Armageddon or the plague, I would have slept right through it and died in my sleep, most likely.

Who wants to hear about the day’s murders and corruption right before going to sleep anyway? Do television stations think the 11 O’clock news helps people prepare for a good night’s rest? Recapping the day’s atrocities? I don’t get it. And I’m sure I’m not alone on this. I know there are tons of people my age and younger who think the 11 O’clock news is as relevant as looking for something in a phone book. It’s totally and completely antiquated.

Many channels now have late night programming in place of the 11 O’clock news. TBS shows Conan and that’s 1,000 times more pleasant than hearing about the day’s murder count. For some reason certain channels have the 10 O’clock news—for those who need their anxiety-inducing murder count information an hour earlier.

A lot of times, the channel you’re watching will sneak in a quick 11 O’clock news “Special Report” promo during the telecast to entice you to stay tuned after the program you’re watching. They always say “immediately after the game” because they know people don’t care and if they let one second of time elapse between the end of the show and the beginning of the newscast, people will flick it off. Usually it’s a news story filled with such hyperbole that it’s laughable. “Doing something that might kill you and your family? Find out if you’re one of millions doing it, tonight at 11.” Love those quick hit promos! Then you tune in to the news and they tell you something ridiculous like smoking will kill you. Really? No shit? Smoking, huh? THAT’s the Special Report?

The news is really easy to follow these days and hardly requires any reading at all. You can hop on CNN or Twitter and find out the world’s events in about three minutes. All you have to do is read the bold headlines to each section or catch a few keywords. If you need more relevant info to your immediate world, like weather, traffic, etc., that can be found in seconds.

I personally don’t watch or read the news if I can help it. The reason being is that it’s not news. Watching the 11 O’clock news is not news. It’s BAD NEWS. That’s all it is. Bad news. It’s a breakdown of the murders, rapes, assaults and petty crimes and robberies that took place in your area. It’s also a recap and general synopsis of local and governmental corruption. THAT’S IT! That’s not news! That’s telling you how miserable life is and it’s a negative interpretation of the world. It’s no wonder there’s an anti-depressant commercial on every 10 minutes!

It’s a proven fact that the more you’re exposed to negative input, you’re attitude takes a negative outlook. If someone is told that they are stupid or ugly their whole life, they believe it. Why wouldn’t they? It’s a constant stream of negative input and they don’t know the other, more positive outlook on things. Same with the news. If you watch the news all the time, you’d think we live in the most heinous and horrible place in the entire Milky Way. When the opposite is true. We live in a pretty incredible place, in a fascinating time and life is pretty fucking good.

Yea, we have problems. Everyone has problems. We lose money, our leaders are stupid and corrupt. There’s dangers at every turn. But so what? That’s what’s fascinating about life. Life is a mystery. The news would have you believe that we should lock ourselves in a closet and not come out till it’s time to hop in a casket.

Another problem with the news is that everyone believes everything they see on TV. No matter how one-sided the reporting is. I have family members recite “something they heard” to me when they’re simply rehashing the “bad news” they saw on TV almost word for word. “If we don’t stop using plastic cling wrap right now, the world’s slug population will be extinct by 2087.” Really? Fascinating! And you heard this info where? No, wait! Let me guess. On the news?

Certain groups use the news to advertise their agendas.

Corn syrup is bad!
No, corn syrup is just sugar.
No, it’s really bad for you!
Sugar is sugar!!

Who do you believe? Why do you care? Just live a normal life of moderation and take everything, including the news (and corn syrup) with a grain of salt. You’ll live longer, have a better outlook on life and you’ll enjoy living a lot more.