THE ADVANCEMENT OF SOAP 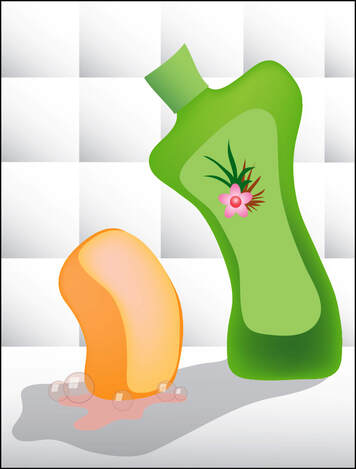 Soap has come a long way, baby! Back when I was a kid my mother would slap a bar of neon-orange Dial in my hand and told me to wash up. That bar would last so long, it would sit in the soap dish and get a sickly white coating and eventually split down the middle like a beached fish baking in the sun.

Now we have all kinds of “soap.” And I put quotes around soap because we’ve advanced way beyond what is considered simple washing soap these days. Now we have body butters, exfoliating body washes and dermatologist recommended medicinal scrubs containing the essence of plant DNA gleaned from the rain forests of the Earth. It’s possible these things could cure cancer if given a chance.

These skin cream washes contain moisturizers and scents so enticing, you’d want to smear it on toast and wash it down with a swig of all natural conditioning shampoo. They’re organic, all natural and even have fortifying vitamins inside. It seems that they’d be better for you if you ate them, rather than rub them on your body.

Now that I’m older I’ve advanced from Dial to Dove. Dove has ¼ moisturizing cream and it does help my skin. Unfortunately I go though Dove faster than I go through Dove Bars. I need a new bar every three days and often find myself milking the tiny soap chip that’s sadly glued to the soap holder on my shower wall. If I’m not careful, that thing can slip out of my hand and go down the drain and I’m stuck washing myself with shampoo.

Shampoo is also gone a few steps up the Foam Chain. Nuts extracts and vitamins and all sorts of things, you’re almost convinced your hair is mending itself with some sort of magic potion. The TV commercials convince you as well. They have animated diagraphs of split ends melding together like a salamander growing a new tail. The women on the commercials seem so pleased that they toss their giant manes of hair around in slow motion—their locks bouncing with a shine usually reserved for sports cars after a simonizing.

Soap for all household uses has advanced in technology as well. Dish soap has antibacterial natures, laundry detergent does just about everything but fold your clothes and household cleaners can strip the paint off the wall if not used properly. These products use the power of oxygen to clean as well... little bubbles that provide the elbow grease for you. These bottles combine things like bleach and ammonia, which back in the day would explode in your face, but seems to work together today somehow. They’re all sold to you buy bearded guys who scream at you through the TV—begging you not to miss out on the deal. These deals are usually so good they give you two, plus a bizarre scraper/chopper thing that didn’t seem to make it on its own as a viable TV product.

If you go to any pharmacy, especially a bigger one, there’s about 10,000 different shampoos and soaps on the shelf. There’s more choices than microbrews and wines combined. Where do you even begin to start? It seems like half are named after a person. Sally Herbl…blah blah or Mitchell Something-or-other… Apparently there’s shampoo superstars coming up the ranks faster than a reality show about food/fashion/models and they’re all releasing their amazing locks elixir, which I’m sure is probably just like the other 9,999 other bottles on the wall. Still, it’s fun to stare at all the colors on the shelf. It tends to be mesmerizing.

Way back when, soaps and shampoos were basically rendered fat. The difference between a bar soap and a candlestick depended on where you kept it in your house. Today, most kids haven’t even seen a candle. Modern day candles have so many scents in them now, kids may be tempted to wash with them if they aren’t under the proper supervision.

I once had dandruff so bad, I had a dermatologist give me a prescription for shampoo that recommended that I remove my jewelry before using it. That can’t be a good sign. What’s in that stuff — silver polish? It looked more like Liquid Drano than the cool, sea breeze color of Head and Shoulders. Still, the stuff worked and my dandruff was cured—although there’s probably a school of fish swimming around the Atlantic somewhere, each with three eyes and skin that emanates the fresh scent of Fabreeze.

My wife got a basket of fine soaps for Christmas and some of the soap bars had seeds in them. Actual fruit plant seeds! She said one was from a Brazilian fruit that was very rare. I used it in the shower and I swear I felt fantastic afterwards—like someone had bathed me in liquid sunshine and pat dried me with flower petals.

Bar soaps are becoming a thing of the past though. Most people use liquid soaps and scrub with a loofah. Sometimes I get in the shower and there’s so many scrubbers, sponges and bottles, I feel like I’m in a science lab. The art of getting clean is kind of expensive, but it’s better than walking around with your pores clogged with soap gunk.

The days of soap on a rope may be numbered. They’re experimenting these days cleaning things with sound waves. That’s nice. Could possibly cause hearing damage, but you’ll be clean. Image going to a concert and leaving cleaner than when you entered the stadium… It’s possible!

I once knew a guy who rubbed a crystal under his arms in place of deodorant and it actually worked. He smelled just fine. Not sure how that technology works, but I think I’ll stick to a nice bar of Dial Soap and scalding hot water to eliminate odors before I risk going outside under the mysterious power of crystals.