THE AMERICAN DREAM: MADE IN CHINA 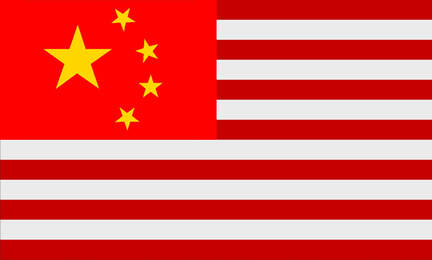 I have a young son and he raked in a pretty good haul this past Christmas. While playing with him one day, I realized that every toy he had was proudly stamped with ‘Made in China.’ Why this surprised me makes little sense what-so-ever because I worked in the toy industry for five years and worked closely with the fine people of Hong Kong and Mainland China. There’s hundreds of millions of employable people there and they’ll work for pennies a day.

Still, I couldn’t help but think about the struggles of the unemployed here in the USA while we farm out jobs to the rest of the world. It’s all about money, of course, but maybe it’s time to start making it about something else.

I watch a show on TV called Shark Tank. Perhaps you’ve seen it. It’s a good show. Inventors come on and present a product or invention they’ve created and want the “Shark Tank” (a panel of rich entrepreneurs) to fund the project or have a stake in the company for a cost. More than a few times the Inventors want their items made in the USA because they see their friends and family struggling, or their community hit hard by the recession and they want to employ their fellow Americans. The sharks obviously think that’s absurd because it kills the profit margin and part of the entertaining aspects of the show is how greedy and industrious the sharks are. If it kills the profit margin, it kills the interest of the Sharks. Americans want high wages, health insurance and they form unions that will get them paid whether they work or not… It’s expensive to employ Americans! Making things in Asian countries and having them shipped here is the most cost effective solution for bottom line profits.

A few times the negotiations have broken down because the Sharks and/or the Inventor refused to bend (or break) on the matter of manufacturing in the USA. I admire those people for wanting those jobs in the US and someone has to start doing it as an example—even if it means a smaller bottom line. Mainly the people at the top need to project for lower profit margins. Honestly, if you’re the CEO or big-wig boss, you can live with a few million bucks and employ your fellow Americans instead of making tens of millions and hiring people living 10,000 miles away. We can do this. This is a collective group effort. American CEOs not only need to adjust their profit margins, American workers need to adjust their cost of living.

I remember seeing a case on the news where a woman was suing her husband for 250,000,000 smackeroos because she insisted that she couldn’t rework her cost of living expenses. After living a charmed life in the upper crust of society, she deemed herself completely incapable of going from Nova Scotia smoked salmon to Starkist canned tuna. The judge didn’t agree and gave her something like a measly 5,000 dollars a month living expense which she claimed would destroy her. What was being destroyed was her lavish carousing lifestyle with hoity-toity snobs of the upper crust that she was accustomed to being with.

Anyone worth their salt can scrape by with five grand a week, yet this woman reacted like she’d been shot in the gut. If she had any real friends, they’d keep her around and still invite her to all the parties and functions she had gone to before. My guess was that she knew that without money, she had no real friends, so she was destined to live in a middle class apartment with a cat and live the life of a princess instead of a queen. OH THE HUMANITY!

But I digress. This economic quagmire is not completely a bosses and CEOs problem. American’s need to suck it up and start working for lower wages, working jobs we deem for lower class citizens AND we may need to make things cheaper to buy. This could cause deflation, but at least we get people working. Deflation can be dangerous and can be just as economically detrimental as inflation, but what’s going on now isn’t working. If we can’t go the deflation route, at least we can stabilize the dollar for a while and big-wigs can stop their bonuses from being outrageous. Trickle down actually has to become a reality and it starts at the top. But we all need to adjust the cost of living.

Trickle down is actually a fantastic theory, but it’s not about the rich having more money—it’s actually about them having slightly less. The trickle down effect is actually perpetuated by employment. If the rich cut into the profit slightly to employ Americans, those Americans in turn buy things—then the places that they buy those things hire employees to keep up business—then the businesses get more supplies and hire suppliers to ship and stock—those people in turn get paid—and they buy and etc. etc. Trickle down is a theory based on employment, not money. And yes, the employment comes with money, but it helps if a handful of people aren’t occupying the profits that are bled from the poor of China, and filter it into the pockets of Americans who want to work, need to work, and need to feed their families.

Another reason we send so much business out of the country is because we have so many restrictions about pollution and manufacturing costs. In China, they make whatever they can for whatever cost and damn the consequences. China is one of the most polluted countries on the planet. Some cities have a constant smoky haze over them and the water and soil is filled with contaminants.

China and other Asian countries have a ton of sick and deformed people as well as child labor and they get stuff made for cents on the dollar. These things can’t be done in America because curbing pollution and waste storage is expensive; paying fat Americans with high expectations is expensive; paying off the EPA and government agents to let things slide by is expensive; and getting caught polluting or dumping is really, REALLY expensive.

But we have to start or eventually or we’re going to have a fraction of the country working and making money to buy anything, and a huge chunk of people without anything to make or profit from. The whole capitalist system breaks down like a self-perpetuating machine unable to feed itself. And that’s what or economic system is, self-perpetuating. If one part breaks down, it starts to malfunction across the board and we’re getting close to a full melt down if we don’t start adjusting our profits and expectations.

Maybe we need to start being dishwashers, and busboys. Maybe we need to be cashiers and the person that screws a screw into a plate of metal on the assembly line. No one is too good for work, so we should all get to rolling up our sleeves and fix the self-perpetuating machine that manufactures AND feeds itself. It’s called the US Economy and everyone needs to be on the same page about getting it fixed and fixed fast.