THE EVOLUTION OF MY COFFEE 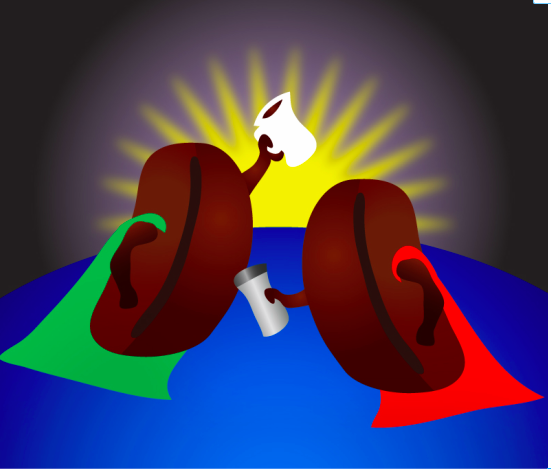 I was recently having a business lunch with a client and we got on the subject of coffee. I know, I’m important enough to have business lunches!! I’m not sure how we got on the subject because we were still in the appetizer portion of our meal and coffee hadn’t been considered yet. We did, however drink a few bottles of wine (quality business meeting) and subjects tend to fly around when the lips get loose with alcohol.

This client of mine said that a friend of his was so into coffee, that he began roasting his own coffee beans in $10,000 coffee-roasting oven he purchased and installed in his kitchen. Of course I found this completely mind-blowing as I’d just graduated from buying store-bought coffee in a can to purchasing fresh ground coffee at the coffee shop.

There’s a lot of obsessions out there in the world… helicopter skiing, Jimmy Choo shoes, B-movies… But if you’re roasting your own coffee beans in a giant $10,000 oven in your kitchen, you freakin’ love coffee. And apparently his wife shares the same passion, so it’s cool he shares this passion with his significant other. But this cone-filtered story got me thinking about the levels of coffee passion there are in the world.

My first cup of coffee that I can remember was a foamy, funky mug of Taster’s Choice instant coffee. I think that’s about as base level as you can go in the coffee consuming world. That freeze-dried jar of brown gravel bits that I yanked from my parent’s kitchen cabinet was probably a few years old at the time too. And the taste? About one level up from warm horse-piss.

After that, I moved on to grabbing a 50¢ cup of coffee at the deli on the way to my house-painting job. Usually that was being poured down my gullet with a sloppy egg sandwich, so the quality was irrelevant to the cheese, bacon and egg combo I was hammering down my throat.

After that, I didn’t drink coffee for about ten years or so. Some people can’t go five minutes without a steaming hot cup of coffee to motivate them—I went ten years. I got by on orange juice and water. Looking back, I’m not sure how I did it, but I was able to survive all sorts of hangovers and late nights without it.

After that stint of abstinence, I made it back to coffee through my corner deli again. Once I exhausted every sandwich in that joint, I graduated to the bagel shop next door that had a slightly higher grade of coffee to offer—barely noticeable, but still better.

Then I got a job in midtown Manhattan where my only option was to slug it out with 500 people every morning in a shoe-boxed sized Starbucks to get my overpriced coffee that tasted like Scottish hill-side mulch. The office I worked in had one of those single-serving insta-brew coffee makers, but those had varying levels of quality—especially if the only flavor left was hazelnut or jungle rich dark or some other crap like that.

Then one day I got a gift in the mail. It wasn’t for me per se, but for the person who lived in my apartment before me. Yup, it was a brand new coffee maker. I tried to return it to the company, and I even tried to forward it on to the previous renter’s address, but no one seemed to want the stupid thing—so I kept it! My first official coffee maker—in my house!

My first coffee purchase in the store was some canned coffee. I think it was Folger’s and I got two cans because it was on sale. I got the French Roast because I thought it would actually be a step up from the regular Folger’s, but it was the same generic crap. Folger’s, Maxwell House… they’re all just freeze-dried coffee in disguise.

Then one day I saw some coffee that was on sale—2 cans for the price of 1. A small brand name that I’d never heard of and bought two cans to give it a try. Man, was it good! Even though it was coffee in a can, the quality was better by ten fold. The grounds were rich and moist—thick like soil and the smell was fresh. Those two cans really woke me up (no pun intended) to coffee and how good it can be.

I continued my loyalty to that brand until that particular sale ran out on the 2 for 1 deal. What can I say, I was on a budget! Then my wife told me about how good Brazillian coffee was. I went to my local coffee shop and ordered half a pound of Brazillian Cerrado and had it ground in the shop... Forget it! After that I was hooked. There is simply nothing better than that first cup of fresh ground coffee.

My parents would grind their coffee beans every morning, but they grew tired of the work involved. Unfortunately they stepped down from fresh ground beans all the way down to a Costco econo-can (see: oil barrel) that lasts about 8 months. I never wanted to get involved with the grinder because it’s noisy and seems like a lot of effort to get great coffee. But going from store canned to fresh ground is a huge leap.

So here I am, enjoying my coffee, thinking it’s the best, but it’s not even close to the level it could be. I could still buy the beans and grind them myself in my home just seconds before the hot water drains over them—coffee that is even fresher still. But then I hear about this guy who roasts his own beans in his $10,000 coffee oven and I’m officially an amateur in the coffee consuming world.

But there’s still more levels of coffee than even this guy and his $10,000 oven. If he wanted, he and his wife could grow their own beans. That would take it up a notch—cultivate and grow their own coffee beans. When you start getting into farming so you can simply sip a cup of coffee, then you’ve really hit the stratosphere.

But there’s more! America doesn’t really have the rich soil needed for proper coffee growing. They could potentially BUY a coffee plantation in Columbia or somewhere in South America or Africa. Then they could work with farmers and coffee experts to make the finest beans they possibly can so they can have the best cup of coffee they can possibly drink.

Then, if they really wanted to take coffee into the future, they could work with scientists and horticulturists about crossbreeding the two or three best coffee beans in the world to make one ultra-delicious super-bean that could blow the minds of coffee drinkers all around the planet.

So just know that if you’re dumping instant coffee grounds into a mug of luke-warm water to make a so-called “cup of coffee,” you’re about as low as you can go on the coffee totem pole—like a new-born baby of coffee consumption. There’s a lot of growing up to do in this particular world and I’m somewhere in the middle stages of coffee life. But I think that’s probably where I’ll stay as I’m not certain I can handle a coffee plantation and I certainly can’t afford a $10,000 coffee bean roasting oven.