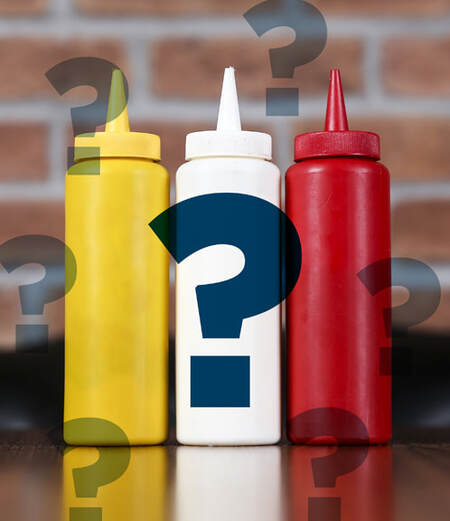 The world is in serious need of a new condiment. Where is it already? Why hasn’t anyone working in the food processing or experimental food recipe industry (if there is one) invented a new one yet?

All these big companies like Kraft and Heinz and even fast food chains like McDonald’s are always creating new recipes and combinations of flavors. So why isn’t there a new condiment yet? Of all the foodstuffs on the planet to make condiments from, there has to be a new combination we haven’t thought of yet. There simply has to be!

Mayonnaise has been around for like, hundreds of years. So has that 84-ounce jar of mayo in your refrigerator. Mayo is a spastic concoction of eggs and whipped oil and vinegar. What psycho first whipped up that bastardized batch of funkiness? What was he trying to make in the first place? Wagon wheel grease? I like mayo, I simply don’t know how it came to be and what led the person who invented it to go from A to B to mayonnaise.

Then we have ketchup. Mashed tomatoes and vinegar (a constant in these things) and sugar and salt. Seems simple, yet there’s no variation on this either. You’d think that taking anything and mashing it into a paste with vinegar would work, but apparently not, as nothing has been invented yet that tickles our pallets.

Mustard is a plant seed. How the hell did this one come about? Millions smear this strange neon yellow seed on hot dogs and sandwiches every day, yet no one thinks as to why. Has there been no advancement in the seed industry to percolate our taste interests? I find it hard to believe.

Some company makes something called Baconnaise. It’s a bacon-based mayonnaise. Might as well call that ‘massive coronary in a jar.’ Even for someone who gravitates towards food that’s really shitty for me, even Baconnaise makes my aorta scream in terror.

In Great Britain, they use HP sauce, which they affectionately refer to as brown sauce. Sounds appetizing, I know, but it’s actually pretty good. Again, it’s vinegar based and is really just a ketchup-like product on steroids. Sort of like gravy in a bottle, yet it’s meat free.

We have all kinds of jellies and jams and pickle relish, hot sauce, taco sauce, steak sauce, barbeque sauce, soy sauce, worcestershire sauce, teriyaki sauce, duck sauce, sweet & sour sauce, hollandaise sauce, béarnaise sauce, tartar sauce, cranberry sauce and pestos and salsas and salad dressings of all varieties. Yet none have made a permanent place on the essential condiment rack that litter our food courts as far as I can see. Have you ever seen a waitress come to your table with one of those metal carry racks filled with condiments for your meal and seen something new? NO! It’s a condiment dilemma!

Salt and pepper is fine and dandy, and they’re especially charming when they appear in those little Corona Beer bottles with plastic caps with holes punched in them. But salt and pepper has been around since the dinosaur age and let’s face it, they’re not colorful or liquidy and we’re not dumping it on our burgers. They’re flavor enhancers and can barely be considered condiments. They’re more like elements.

Soy sauce has gotten a bit more popular in the United States. It seems to be more commonplace on the table, but that may be due to the popularity of Asian foods. Chinese has been huge for years and sushi, Thai, Korean and Vietnamese are becoming more popular dinner choices all the time. But soy sauce isn’t really a condiment either. It’s really just a liquid salt.

These days, people make their own condiments. They mash up fruit and veggies and call it chutney. “Tonight we have a honey-glazed pork loin with a mango chutney.” Chutney’s nice, but that’s just glorified apple sauce. Is apple sauce a condiment? Not really. It’s tasty and all, but I’m looking for the new ketchup. Where is it?

A few years ago Heinz introduced a green ketchup to mix things up. It failed miserably. It was still ketchup, and that was the probably the problem! If it was made from asparagus or eucalyptus or something, then it might have peeked an interest. But trying to get a 7 year-old to buy into a ketchup that’s anything but its cheerfully bright red color is a majorly misdirected idea. Only a stupid adult would think of something so stupid.

Miracle Whip has been riding on the coattails of mayo since the 1930’s, but it’s freakin’ mayonnaise too! I can’t tell the difference! If you’re slathering a white cream on your ham, turkey, cheese and lettuce sandwich, you’re probably not noticing the subtle differences between these two lard-based spread products.

Burger joints have a “secret sauce” which is usually just Russian dressing; which is actually just ketchup and mayo mixed together. But no one seems to have even made this leap in condiment technology—mixing two condiments together. Seems like it’d be easy, but I guess not. Sometimes you see the pickle relish and mustard combo thing on the store shelf, but it looks like a jar of nuclear waste. Terrible! It’s almost as bad as the jar of peanut butter and jelly in the same jar. What lazy bastard invented that one?

Tartar sauce is mayo and pickle relish, basically. Has anyone actually sat in a kitchen and mixed different condiment combinations together? I mean really gone for it? Mixing four or five together to find a new sauce? If I had the time I’d do it, but I have a job. It has to be someone’s job to figure this crap out! Is Obama on this project? What’s his personal chef doing when Obama is traveling around on speaking tours? Can’t some White House kitchen guys knock out a few ideas? Who’s paying these people? I think WE are, that’s who! I want these guys on the job right now! Have them ask Trump to haul back a bunch of ponzu sauce and other stuff on Air-Force One the next time the President is bouncing around the Pacific Rim.

So that’s my hope in life right now—to have the great pleasure of placing a newfangled sauce on my steaming wiener or fried meat patty. Whether it be a rich and creamy white sauce, or a spicy and tangy red sauce, or something completely new and different. I have high hopes for the chefs of the world. I truly believe they can do it. I HOPE they can do it. I think it’s essential to the growth of human kind as we know it. Maybe they will invent a black sauce or a chunky blue sauce to put on my burger and greasy deep-fried potatoes. Have we invented any new colors in the last few years?