WHO WANTS TO BE ON WHEEL OF JEOPARDY? 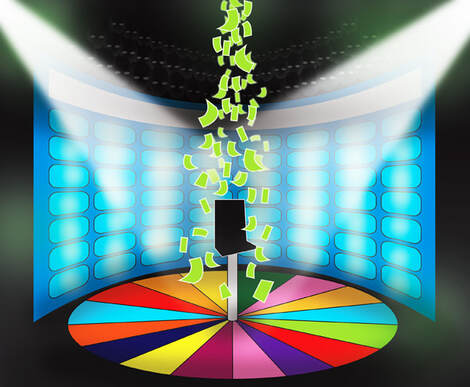 I know you may find this hard to believe, but I’m a huge fan of the show Jeopardy. I’ve been watching it since I was a kid and absolutely love it. I still get about 97% of the questions wrong, but I still love it. I’m a big trivia buff. I’ve even tried out for the game show Who Want To Be A Millionaire and passed the (well-known to be difficult) test and had an interview, yet was not asked to be on the show. Guess I’m not “pretty” enough. Damn you Hollywood and your high standards!

Even though Millionaire’s popularity sky-rocketed and then waned, Jeopardy has remained a constant, not only on the game show landscape, but on the television landscape. It’s a part of our culture as much as anything—perhaps even more than the Simpsons or 60 Minutes. I mean, how many people can hum the Jeopardy theme right now without batting an eye? Jeopardy is a pretty difficult trivia show, but once in a while they’ll feature a category for dumb-asses like me. Categories like Movies or Sports or something random like, 80s Music. I tend to knock those out of the park. Most of the time though, I’m either scratching my head in perpetual perplexity or trying to convince myself that Alex Trebek is speaking a different language.

One of my biggest faults is not being able to finish reading the answer before one of the contestants gives the question. (for those who don’t know the show, they give you the answer and you answer with the question, in the form of a question). I have attention issues and sometimes my mind wanders off as the question is being read. I also don’t trust listening to Alex read off the question because I have listening issues as well—so Alex talking and me reading simultaneously, tend to conflict. That leads to me blurting out an embarrassingly wrong answer. Like when Alex asks for the capital of a state and I answer the name of the state instead. That’s a common boner on my part.

I also like to watch the show that immediately follows Jeopardy, Wheel Of Fortune. These two shows have been running back to back for decades now and they’re as recognizable as gin and tonic. I’ve had a love/hate relationship with Wheel Of Fortune my whole life. I’m not as big of a fan of WOF because the contestants on the show are so incredibly stupid. First off, they answer the puzzle when there’s TONS of the same letter left on the board. Recently, a guy solved the puzzle with only $650 and there were still four B’s left on the board. That shit drives me insane! I wonder if people actually know how to play the game before they come on the show. I assume they do because, why else would they be there?

When I was a kid, I was convinced for a while that when the crowd collectively yelled “Wheel! Of! Fortune!” at the beginning of the show, that they were actually yelling “Wheel! Of! Torture!” (if you listen closely, it does sound like they’re saying torture.) The main problem I have with Wheel Of Fortune is the contestants just can’t seem to solve the puzzles, even when the ENTIRE puzzle is exposed with only one or two letters missing. Sometimes I find myself screaming at the television out of frustration. My mother and I watched this classic episode together many years ago and I almost had to be hospitalized afterward…

Although there are things I enjoy about both shows, my absolute least favorite part of each show is the interview portion—especially Jeopardy. I actually find it quite torturous. On Wheel, the people are a bit more tolerable because they’re happy and they’re usually decent people with husbands or kids or dogs and jobs. But on Jeopardy, the contestants are either horribly boring or harboring some strange pent-up nerd anger.

The reason they’re so boring is because most of these people have been staring at books and calculating numbers for their entire lives. Many seem incapable of talking to a human unless it’s in the form of a question—or answer in this case. “So, it says here Simon that you once played checkers for 12 hours straight? Tell me about that.” “That’s right Alex. Back in college, my roommate Eugene and I shared a beer and hunkered down for a tour-de-force checkers session which lasted approximately 12 hours and seven minutes.” “And who, may I ask, won?” “Let’s just call it a tie, Alex.” (bad forced chuckle)

Obviously before the show starts, the contestants fill out a card of subject matter that they’d like Alex to chat with them about, but these folks are as exciting as categorizing books in the Dewey Decimal System. Instead of getting insight into their lives, it shines a spotlight on their pitifully awkward existence. I don’t feel sorry or begrudge these people in any way. They are who they are. The world is made up of all kinds of people. But I don’t necessarily want to know more about them. I’d prefer if Jeopardy announcer (Johnny Gilbert) just announced their names and their occupation at the beginning of the show and leave it at that. “From Tuscaloosa Alabama, a water conservation engineer, Robert Svengilikis.” That’s it. That’s all I need to know about the guy. Let’s play the game and keep things moving till the final Jeopardy questions (answers) are revealed.

Another insight into the contestant’s personality is the way they write their name on the screen. Some people write their name in HUGE block letters and others in really small script. I’m sure a hand writing expert can get into further detail about their personality quirks, but sometimes you see how they write their name and say “uh, oh. This one has problems.” The people who write their name ridiculously huge are usually named Bob. The other day I saw a kid write his name and final Jeopardy answer so perfectly, I thought he typed it out on the screen with a keyboard. This little bugger was so smart (the eventual winner), he probably filled out his Final Answer in HTML code. I’m surprised he didn’t change the color of the font and animate it as well.

On Who Wants To Be A Millionaire, we’re forced to watch the contestants “talk out” their answers throughout the entire show. In fact, it’s encouraged. But that can be even more excruciating than anything Wheel and Jeopardy has to offer. Instead of the show being the star of the show, the contestant is the star of the show. Talk about the inmates running the asylum! Sometimes these people have the most bizarre thought processes and tend to be obnoxious. Looking back, maybe I wasn’t quirky enough to be on Millionaire. They like people who can babble a constant stream of completely unconnected thoughts so host, Meredith Vieira can knock zippy one-liners off of them. It’s not entertaining if we’re not laughing AT THEM.

So I will continue to watch Jeopardy because it’s a formula that works—Interview and all. It’s a formula that hasn’t changed in a very long time. Like the recipe for Coke. (Except when they changed it in the mid 80s... Forget the changing of the recipe part—perhaps a bad analogy). Maybe in some ways, Jeopardy has been MORE consistent than Coca Cola. Amazing! And Wheel has been pretty consistent too. Consistent in driving me bat-shit crazy. Millionaire hasn’t been around long enough to give me feelings one way or the other. Although I’m still bitter I wasn’t asked to be on the show.

So let me leave you with this final video, my friends. I mean, how many shows have a song parody about them?

Until next time, this is A.J. Schmitz, saying… goodnight.